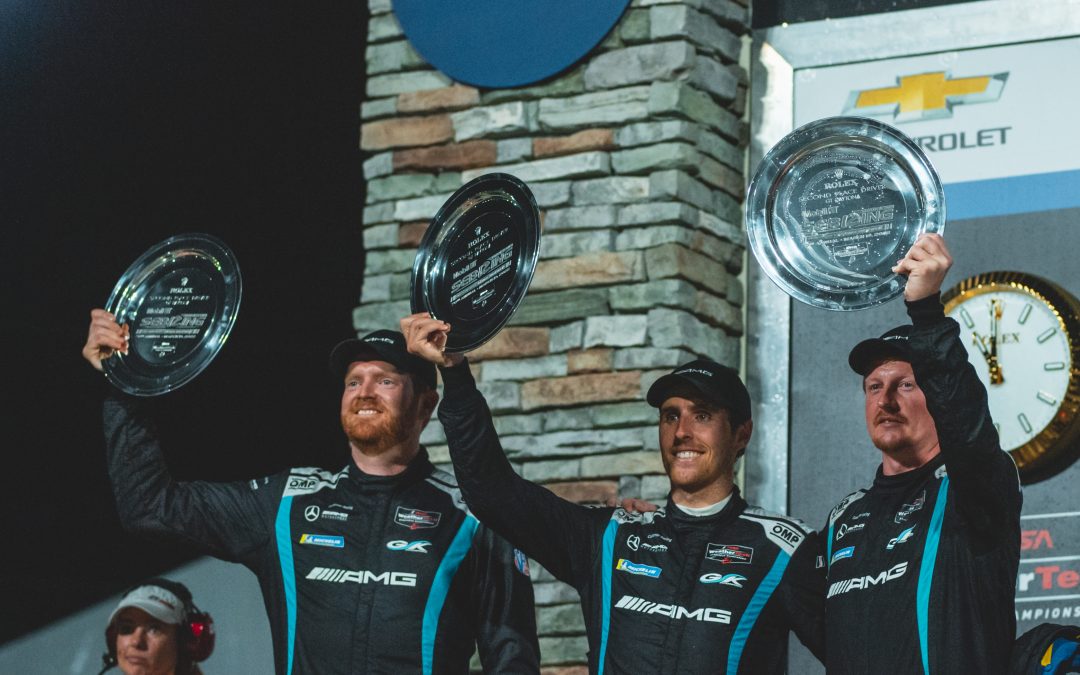 Gilbert Korthoff Motorsports drivers Mike Skeen and Stevan McAleer have been surprised at the team’s strong start to the IMSA WeatherTech SportsCar Championship season after it recorded its second consecutive class podium in Saturday’s Mobil 1 Twelve Hours of Sebring.

The strong runner-up result at Sebring for the team comes after a third-place class finish in the season opener at Daytona in what has put them into an early points lead in its first full-season GTD campaign.

The Mercedes-AMG GT3 Evo operation was surrounded in controversy in January when it dropped founding driver Guy Cosmo from the lineup following the Daytona Qualifying Race, then went on to finish third in the race with replacement driver James Davison.

“I think we’ve surprised even ourselves a little bit with this program so far,” Skeen told Sportscar365.

“Imagine that we’d be leading the championship coming out of Sebring. It would be a far fetch at the beginning of the year. We’re thrilled.

“The car has been fantastic. The guys have been doing great stops and we’ve just been staying out of trouble, really.

“I don’t think we’ve been the fastest car either here or Daytona but having come away with good results, hopefully we can keep the momentum into the sprint races.”

According to Silver-rated Skeen, the team struggled with setup throughout the weekend at Sebring.

The resulting lack of pace forced the team to find different ways to make its way to the front in the highly competitive production-based class.

“Honestly, I think we struggled a little bit this weekend, getting the handling the way we wanted to be,” Skeen said.

“We didn’t have quite the outright pace that we wanted.

“We were struggling with understeer most of the day and ended up fuel saving in a lot of cases to make some better strategy for ourselves rather than trying to win on outright pace.”

The relatively trouble-free nature of the team’s run — only serving two drive-through penalties in the early stages — was notable as all other AMG squads suffered some form of reliability problem throughout the weekend.

According to McAleer, the team’s clean run could potentially be traced all the way back to the big, multi-car pileup in last year’s Motul Petit Le Mans.

“It’s funny, but when I had the crash at Road Atlanta, it gave the guys an opportunity to strip the car down to absolutely nothing and build it back up,” he said.

“We’re dealing with guys that haven’t done this particular manufacturer before.

“So between them and some of the really good Mercedes guys that have been on board. These guys are on it.

“I don’t want to say it is our to lose but they’re really going through this with a fine comb.

With the team now in the lead in the GTD championship, the goals for McAleer and Skeen are twofold: both defend the championship lead and aim to get the first race victory for the relatively young squad.

“There’s a long way to go,” McAleer said. “We got the two biggest races out of the way but you saw a couple of cars at the end having some fuel or mechanical issues.

“With these races you never know until the checkered flag. These guys have performed well, the car’s run flawlessly for two weekends.

“On to a couple of sprint races now. Mike and me are going to see if we can hold our own and probably bring Dani back for Watkins Glen and Petit Le Mans.

“It’s pretty impressive. I love to see it in the eyes of the crew. They’ve been working hard long nights for this.

“You could see it in their eyes as we went across the line. It’s pretty special.”

Skeen added: “We would like to get some race wins during the year. We’re certainly going for the points championship but I don’t think we want to get too ahead of ourselves.

“For us, it’s going out, having fun and getting some wins.”

Daniel Lloyd contributed to this report