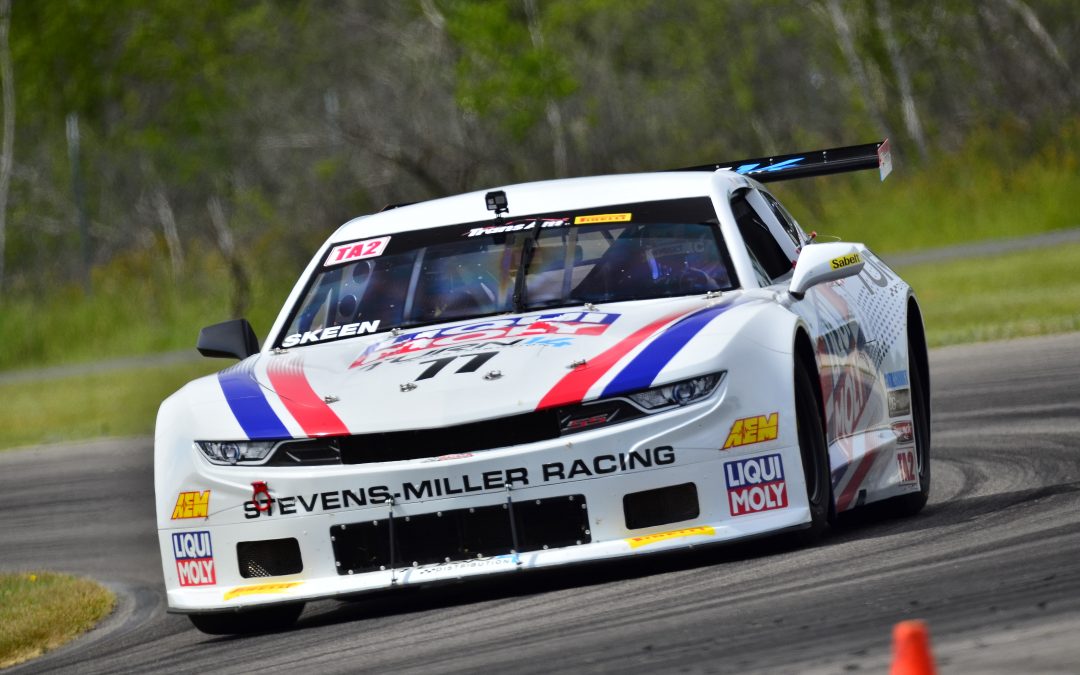 BRAINERD, MI (12 July 2020) – Mike Skeen pulled away on a late restart and went on to win Sunday’s Ryan Companies US presents the Jep Copham Tribute Weekend at Brainerd International Raceway. The victory is the second of the Trans Am Series presented by Pirelli TA2® Powered by AEM season for the Stevens-Miller driver, who opened 2020 with a win at Sebring International Raceway.

A late caution for the stopped No. 37 Big Machine Vodka Ford Mustang of Edward Sevadjian set up a nine-lap sprint to the finish. Skeen got the jump on three competitors, who lost ground during a heated back-and-forth battle for second, and went on to take the checkered flag 2.038-seconds ahead of Thomas Merrill, who was closely pursued by Rafa Matos and Scott Lagasse Jr.

“The race couldn’t have gone much better,” said Skeen, who collected his third career Trans Am victory. “It was a little messy at the start going three-wide into Turn 2, but I backed off because I knew I had a good race car and didn’t want to mess it up early. I ran behind Thomas (Merrill) for a bit, and we were able to get a gap on the cars behind us. When I finally found a gap, I went for it and took the lead. It feels really good to come back and rebound from Mid-Ohio.” 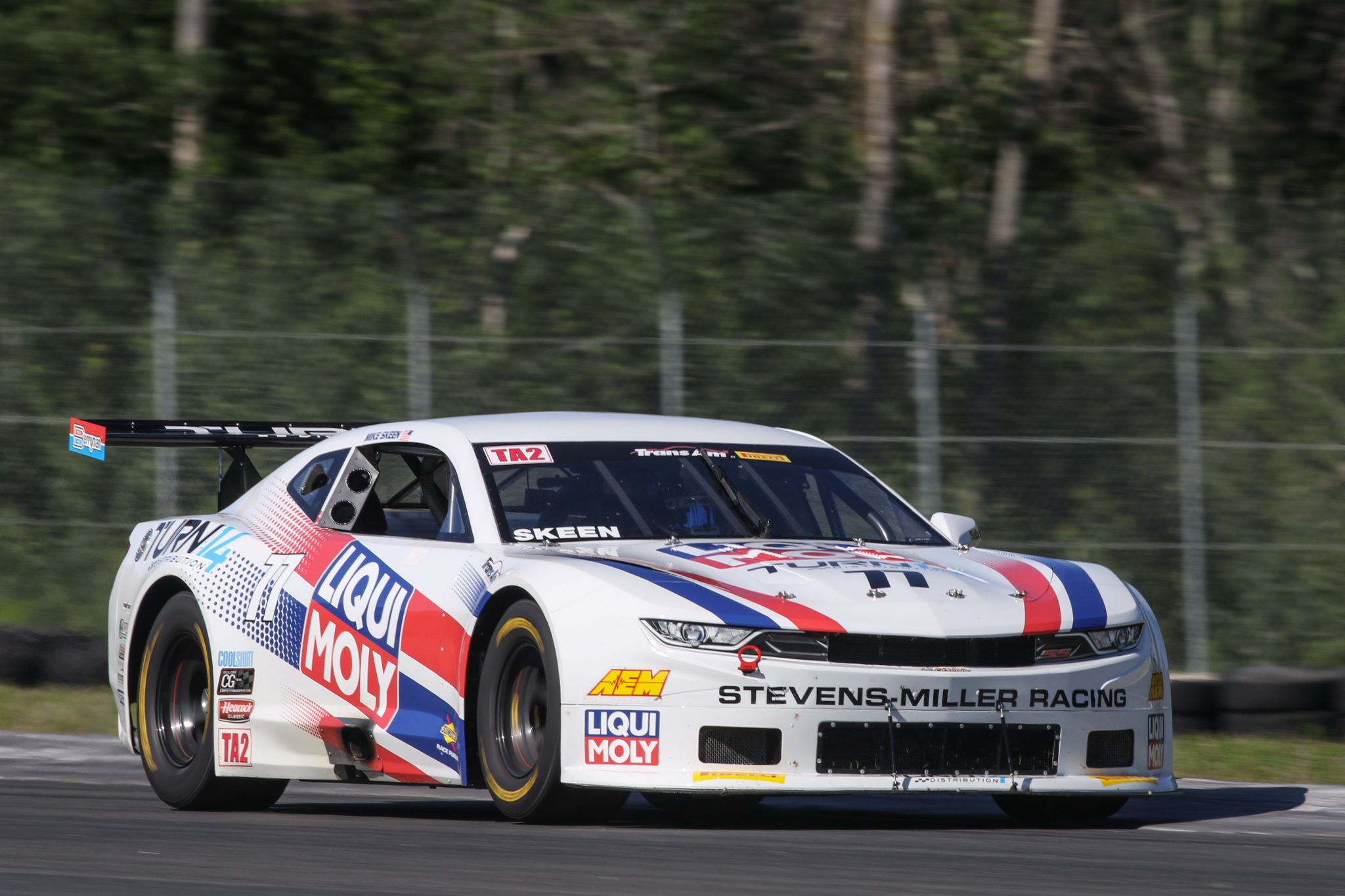 Skeen won the pole in the No. 77 Liqui Moly Turn 14 Chevrolet Camaro, but was beaten out at the green flag when third-starting Lagasse snuck between the front row starters to take the lead. Lagasse led the opening four circuits before a brief off-course excursion in Turn 14 dropped him to fourth.

Thomas Merrill, provisional winner of the most recent race at Mid-Ohio, capitalized on Lagasse’s misfortune to lead 10 laps, although closely pursued by Skeen before finally yielding the lead.

“The race was great,” Merrill said. “It was a learning experience on how long the car would last and how well the tires would do. I was happy to see the caution coming out and it put me back in striking distance. But Rafa and Scott made that more difficult than we planned. My Wilwood brakes really came in handy today.”

On the final restart, Matos managed to pull alongside Merrill in the fight for second, with light contact. While Merrill held the position, Lagasse managed to pull ahead of Matos. But not for long. Going wheel-to-wheel with his fellow Floridian in Turn 4, Matos regained the position. The quick pass saw Matos collect the Cool Shirt ‘Cool Move of the Race.’

“I was pushing very hard in the last few laps,” said Matos. “I knew Lagasse wanted to go for that third spot. I am a little disappointed I didn’t have the pace to go for the win. I felt that in the first two days in practice and qualifying, we had the car, but we missed a little bit today. We remained consistent and collected some points. That’s what it takes to win a championship.”

Lagasse managed a pair of impressive passes at the start and on the restart, but was unable to capitalize in his fourth-place finish in the No. 92 M1 Racecars Camaro.

“At the start, the cars in front of me didn’t get going and two of them got to fighting and dragging each other down, which left me a nice little hole,” Lagasse said. “It was more than I was expecting. But I just screwed up today. I should have trusted myself on the setup and made changes before the race. I just missed it, and drove it off the race track, wheel hopped the track bad. It’s my first time here and the car is in one piece. We will take it and go, but we didn’t show what we are capable of.”

Cameron Lawrence started mid-pack after hitting the wall in Saturday qualifying. He then was assessed a stop-and-go penalty for jumping the start. Putting his head down, the 2017 Brainerd TA winner worked his way through the field to finish fifth in the No. 8 3-Dimensional Services Group Ford Mustang.

Young star Jett Noland finished sixth in the Nolands Roofing/Cypress Hunting Ford Mustang, followed by a pair of series’ debutants, Travis Cope in his father’s No. 26 Mike Cope Racing Mustang, and Dylan Archer in the No. 22 ForgeLine Wheels Camaro.

Tim Gray was the Masters Class winner in the No. 60 Ryan Companies US Mustang. The native of nearby Eden Prairie, Minnesota, learned to race at what was then known as the Donnebrook Road Course. He now has 33 Trans Am starts, with six class victories. 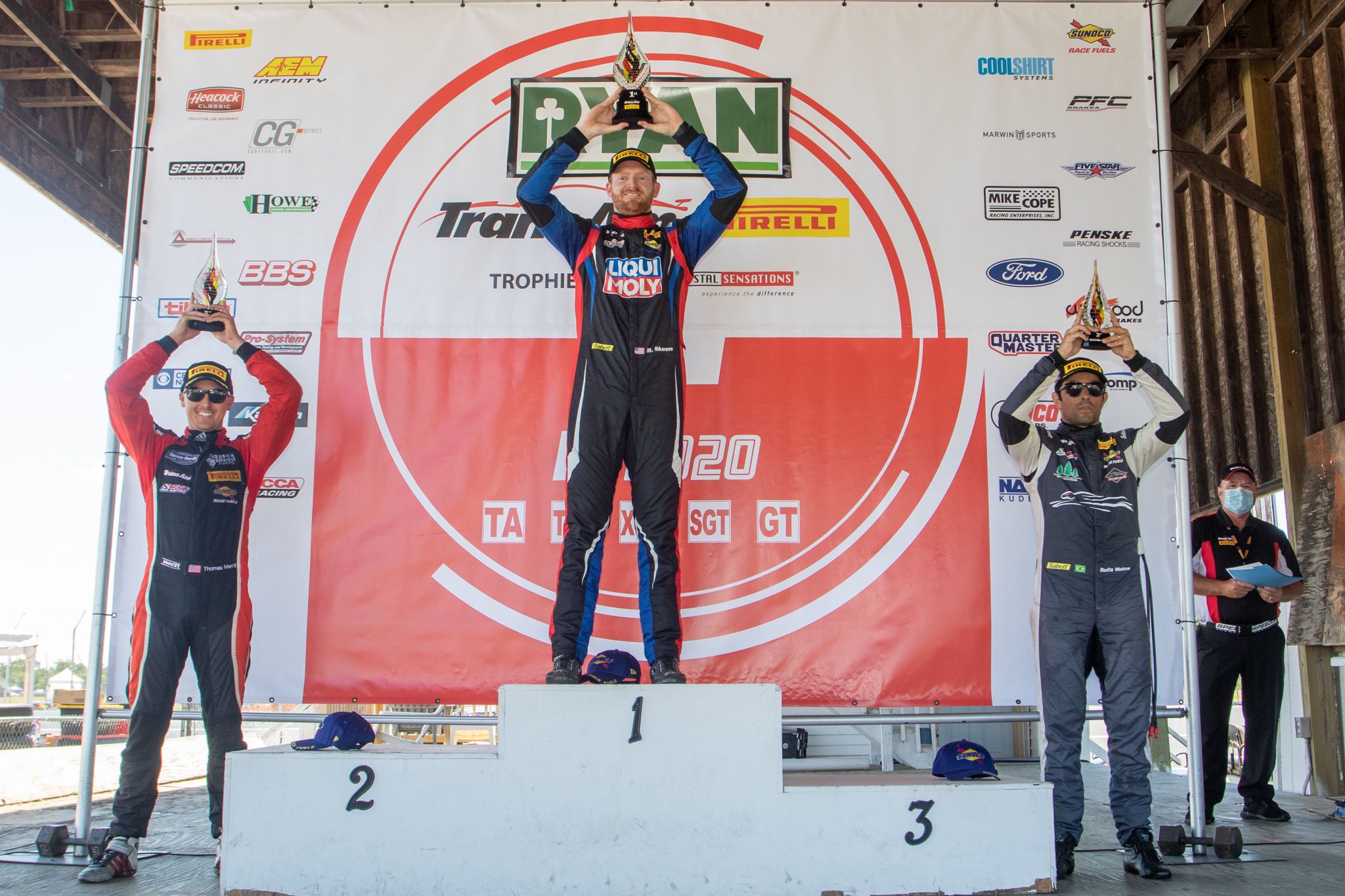 “The race was clean and everyone stayed clean,” said Gray, who finished 13th overall. “It was good but long. Brainerd is kind of my home track. This is where I started racing.”

The exciting event featured a number of off-course excursions. All were able to continue with the exception of Sevadjian, who could not continue with a mechanical problem.

By downloading the app, fans can access Trans Am content. Fans can watch the live stream of the races, the replays, follow their favorite drivers through the field by switching from six different camera angles, access live timing and scoring, keep up with the latest news and download the event program all from the Trans Am by Pirelli Racing App. (https://bit.ly/2Z9IJKq)