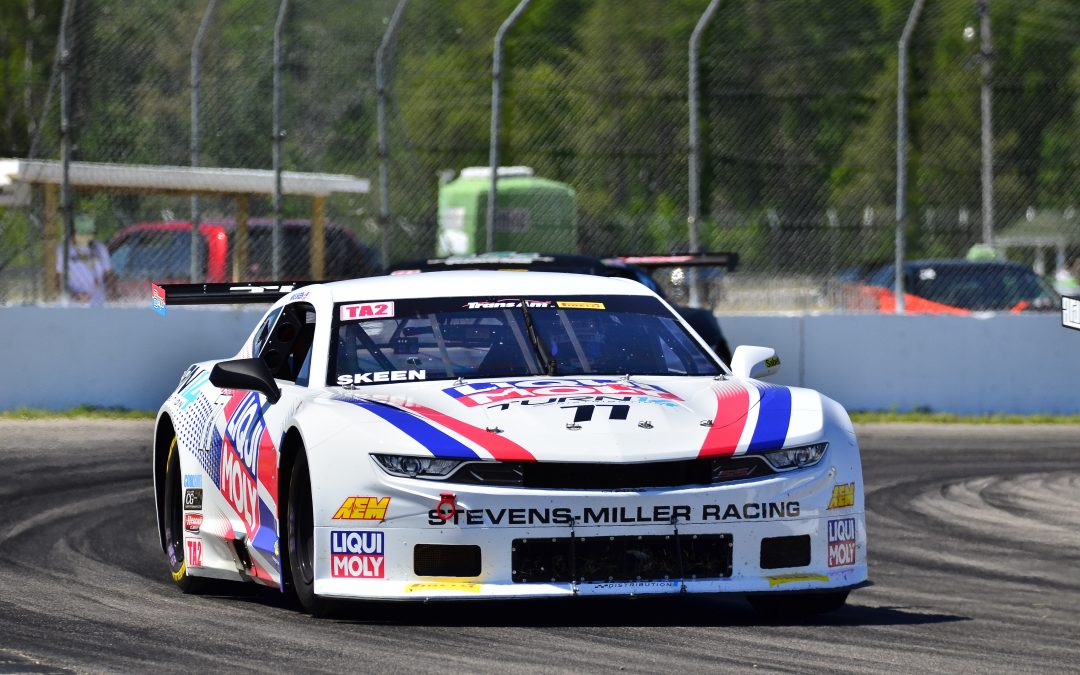 Francis Jr., the 2016 TA4 Brainer winner, is racing in the TA class for the first time at the circuit. The six-time champion put the No. 98 One South Florida Wealth Advisors Ford Mustang atop the TA class with less than two minutes remaining in the 20-minute session with a lap of 1:27.191-seconds. The Breathless Racing crew opted to hold their driver in the pits until later in the session, giving him a gap and clear track behind his competitors.

“It’s nice to be back at Brainerd,” said Francis Jr.“We were trying to wait for a clear track. We went out on the first couple laps to get a clear track without anyone out in front of us. We were able to do that after the black flag, and walked away with the pole.”

Francis Jr.’s 46th-career Trans Am pole came at the expense of Tomy Drissi, who went to the top at the five-minute mark in the No. 8 Lucas Oil Chevrolet Camaro. Drissi later improved to 1:28.261-seconds to secure his front-row start.

“I was looking forward to the pole, but we still scored a couple extra points in second,” said Drissi. “We have some work to do if Ernie (Francis Jr.) could do that on a slick hot track in a TA car. They have a good car. Hope tomorrow we can find out that little something we are missing and we will go to battle.”

Drissi, who has seven career poles in Trans Am plus another five in the Trans Am Series presented by Pirelli West Coast Championship, last raced at Brainerd in 2010, finishing second in a Jaguar.

“Brainerd is really amazing,” he said. “It is fast. It is sweeping. It is smart. It is challenging. It’s a perfect storm with the Trans Am track. Drivers have to think of everything here. We’re thinking of [late track owner] have Jed [Copham], and his wife Kristi and their kids, we are all thinking about how great this track is. I barely recognized it when I came in. It is way better than it was 10 years ago.”

Two-time Brainerd winner Amy Ruman was third fastest in the No. 23 McNichols Company Corvette with a 1:29.144-seconds flyer set early in the session.

“It felt good to be back at Brainerd,” said Ruman, who won here in 2012 and 2015. “It got a little hot this afternoon, and we had that black flag during qualifying that messed up the rhythm a little. Luckily, we got going early on and laid down a pretty good lap. We are happy with P3. It’s been awhile since we’ve been up there in qualifying. I’m really exciting to get the No. 23 McNichols Co Chevrolet Corvette back up there and I’m looking forward to the race on Sunday.”

Shortly after Drissi took the provisional pole, the black flag waved following a spin with contact in Turn 8 involving the No, 19 Advanced Composite Products Cadillac CTS-V of Kerry Hitt. The track returned to green with four minutes remaining, opening the door for Francis. 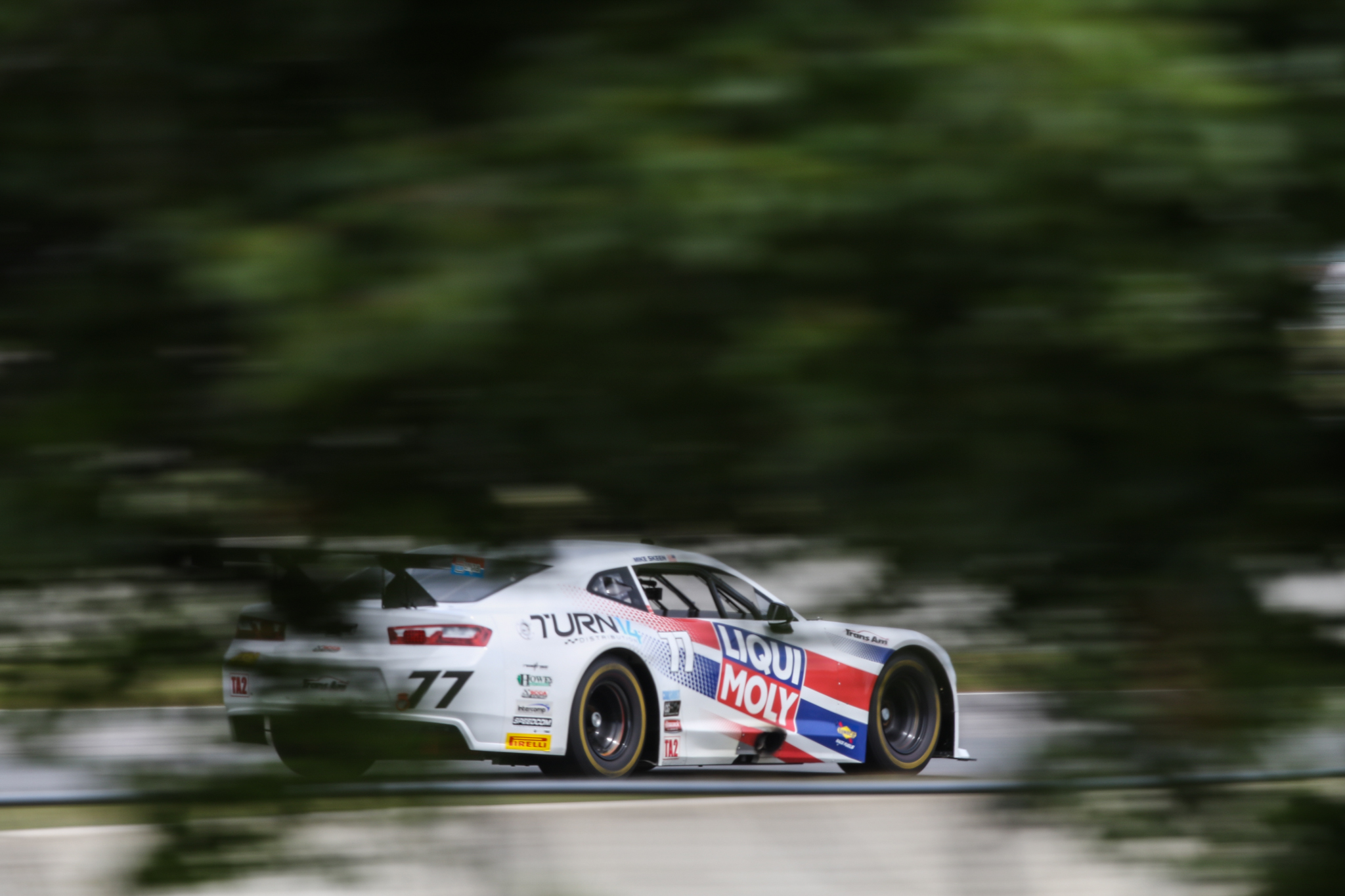 TA2® powered by AEM
Mike Skeen turned a late-session lap of 1:30.853-seconds in the No. 77 Liqui Moly Camaro to lead the 15-car TA2® powered by AEM field in a 20-minute session slowed by a pair of black flags for incidents.

It was the second pole of the campaign for Skeen, who shattered the Sebring track mark in qualifying for the 2020 season opener to win his first pole since 2010 at Road Atlanta.

“It’s been fun, I enjoyed picking up the track,” Skeen said. “It’s a real fast place. It’s been a good challenge. I’m really excited to get the Liqui Moly Camaro back on the pole. Looking to come back strong here, get some points and build on that championship lead.”

Skeen said that his early runs were marred by traffic or black flags.

“With five minutes to go after the last caution, my goal was to just get out there with the fastest out lap that I could do to get a timed lap in,” Skeen said. “That was strong enough.”

Cameron Lawrence’s crew discovered a broken rear wing on the No. 8 3-Dimensional Service Group Ford Mustang on the pre-grid. Lawrence planned to pit after one lap per the rules for the team to correct the problem, but he crashed on his first lap, causing rear-end damage, and the first of two black flags.

Second-generation driver Dylan Archer – who won at the virtual Spa with an impressive run in the inaugural Trans Am by Pirelli Esports Championship held during the COVID-19 layoff – qualified 11th for his Trans Am debut in the No. 22 ForgeLine Wheels Camaro.

“It’s my first time here and I love it now,” Thwaits said. “I’ve heard stories about how fast it is and it kind of freaked me out. I like fast circuits and so does the Audi. We just adapted. We had a game plan in going into testing, practice and then qualifying. Happy to take that pole position and the extra three points.” 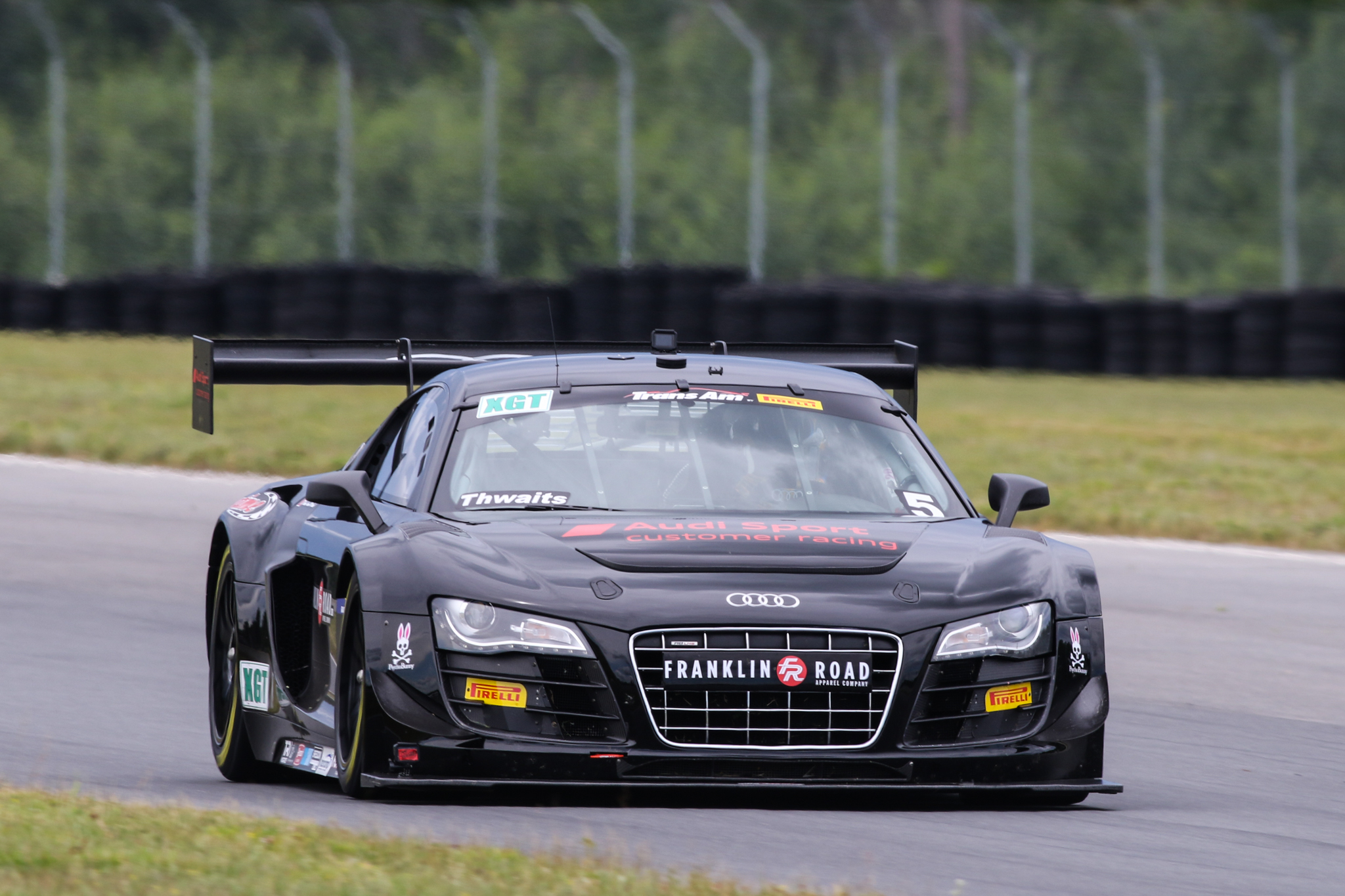 SGT
Sebring winner Lee Saunders captured his ninth career pole to lead the SGT competitors, turning a best lap of 1:32.641-seconds in the No. 84 Landsearch LLC Dodge Viper. He will be joined on the front row by Aaron Pierce, 1:35.152-seconds in the No. 26 Logical Systems/Sam Pierce Chevrolet Corvette.

Currently second in the SGT points, Adrian Wlostowski blew the engine in his No. 96 F.A.S.T. Auto Ford Mustang during Thursday testing and failed to qualify. Undeterred, his crew trailed his GT-1 spec Corvette 800 miles from New York City to Minnesota. Wlostowski borrowed tires and additional parts to make the Corvette SGT spec. He is coming off a career-best second in the recent round at Mid-Ohio.

By downloading the app, fans can access Trans Am content. Fans can watch the live stream of the races, follow their favorite drivers through the field by switching from six different camera angles, access live timing and scoring, keep up with the latest news and download the event program all from the Trans Am by Pirelli Racing App. (https://bit.ly/2Z9IJKq)