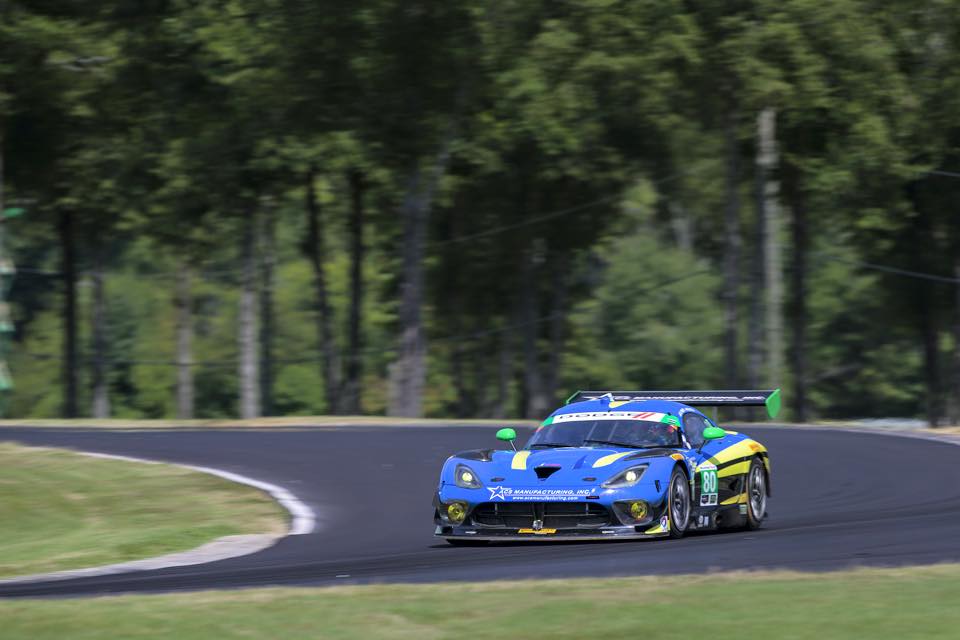 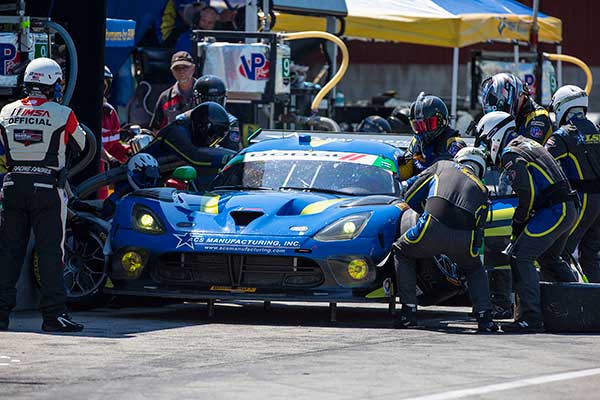 DANVILLE, Virginia (August 30, 2016) – Lone Star Racing was on a top-five run with just 15 minutes to go in this past Sunday’s Michelin GT Challenge at VIRginia International Raceway (VIR) when a right-rear suspension issue slowed the team’s No. 80 ACS Manufacturing/Lone Star Racing Dodge Viper GT3-R to a ninth-place finish.
After taking over the No. 80 from Lone Star Racing team owner and driver Dan Knox in the race’s opening hour, co-driver Mike Skeen raced his way to the top five and was battling to stay there as the clock ticked down.
Skeen was defending fifth place and under heavy pressure for the position from the No. 23 Porsche when the problem worsened.
“We had been running a second or two in front of the No. 23 for several laps and felt like we had enough pace to cover him until the end of the race,” Skeen said. “Unfortunately, something loosened up in the rear of the car, some tiny little part, and the rear end started becoming very inconsistent and unpredictable.”
Soon after the Porsche pounced on the opportunity to take the position, Skeen brought the No. 80 in for a precautionary pit stop.
“The car was getting worse and, at that point, I made the call to bring it in and check it out,” Skeen said. “It was something related to the control arm in the right rear, we started to lose the alignment shims and the car was a little wobbly.”
The team decided to return to the track and take the checkered flag to finish the race. Skeen crossed the finish line in ninth place after carefully cruising through the final laps, staying well clear of the race-leading competitors.
“Mike had consistent lap times over and over throughout the course of the race after he took over,” Knox said. “That, along with the team effort with pit strategy and everything else, got us up to fifth place before we had the mechanical issue. I’m very pleased with what could have been the outcome, not so much how we ended up, but how we were very close to having a top-5 finish.”
Just the third race of the year for Lone Star at VIR, the ninth-place result was the best so far this season, but the team came so close to what would have been an IMSA career-best finish of fifth. 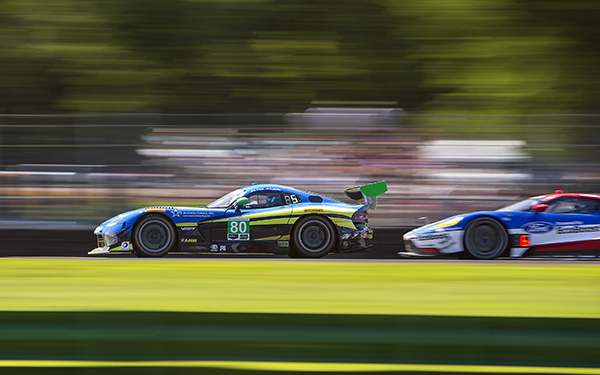 “It was unfortunate, we had a really solid, legitimate top-five finish going on pace and strategy,” Skeen said. “The guys did amazing pit stops all day and that is really what got us up to the front. They did a stellar job, we didn’t get the result on paper at the end of the day to show for it, but you can’t ask for a whole lot more than the pace and performance we showed.”
With VIR his home track, the team put Skeen behind the wheel of the No. 80 for more than two hours of the two-hour and 40-minute race.
“I was a little slow getting going today,” Knox said. “I was about a second-and-a-half to two seconds off where I wanted to be, but the good thing about having myself as a bronze and Mike as a silver is that we don’t have the minimum drive time come into play, which was great. Mike did a great job driving in the majority of the race.”
Knox and Lone Star will in turn visit their home-state track in September for the next round of the IMSA WeatherTech SportsCar Championship at Circuit of The Americas (COTA) in Austin, Texas. Knox and Lone Star are based in the greater Dallas Fort Worth area of Texas.
“It’s always better to go back to a track you have more time and experience on than some of tracks that you’ve been to once or even never, so COTA is going to be good for us,” Knox said. “We are looking for a much better outcome. We had good performance at VIR but we expected to be a lot higher up than where we finished.”
The Lone Star Le Mans will be held at COTA, September 15 – 17. The race can be seen live on FOX Sports 2 (FS2) on Saturday, September 17, at 12:30 p.m. EDT.
Noteworthy
–  Plenty of Lone Star Racing friends and family members will be in attendance at the COTA event. “We’ll have some additional supporters but it won’t be any additional distraction for myself,” Knox said. “I’ve got enough distraction with running the team, work and everything else!”
– The battle Skeen had with the No. 23 Porsche at VIR defending fifth place was pretty spirited. “There was contact but at that point we had slowed our pace quite a bit and we were just trying to get to the end,” Skeen said. “It was a reasonable pass I would say on their part. Our mechanical issue wasn’t really anything related to the contact with the Porsche, it was on the opposite side of the car.”
About Lone Star Racing: Based at Motorsport Ranch within the greater Dallas-Fort Worth area in Cresson, Texas, Lone Star Racing is in its third season campaigning the No. 80 ACS Manufacturing Dodge Viper GT3-R. The team is running a four-race IMSA GT Daytona (GTD) program in 2016 after debuting in the class with a seventh-place finish last year at Circuit of The Americas (COTA). Although Lone Star Racing is new to IMSA, its team members have won races across North America spanning sprint and endurance racing formats. The crew has worked together on many different teams and various types of cars, developing a strong bond and proven capability that gives them a competitive and winning advantage. The team races with the support of primary partner ACS Manufacturing, Inc. (www.acsmanufacturing.com). Look for Lone Star Racing and Dan Knox on Facebook and follow the team on Twitter @LSRTeam.