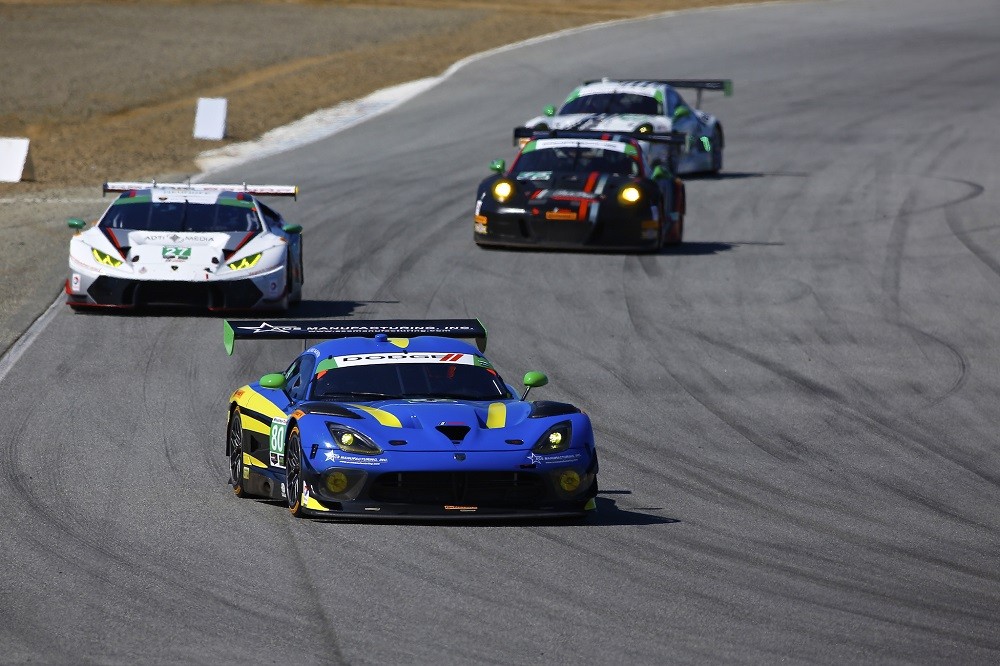 Lone Star Racing Finishes 14th in No. 80 ACS Manufacturing Dodge Viper GT3-R at Laguna Seca
Continental Tire Monterey Grand Prix Team’s First 2016 Race and Just Second Career IMSA GTD Effort
MONTEREY, California (May 1, 2016) – Dan Knox and Mike Skeen co-drove the Lone Star Racing No. 80 ACS Manufacturing Dodge Viper GT3-R to a 14th place finish Sunday in the Continental Tire Monterey Grand Prix at Laguna Seca.
The race was the first in 2016 for the Texas-based team and just its second career start in IMSA GT Daytona (GTD) competition after debuting at Circuit of The Americas (COTA) last September.
Knox, who was also making his Laguna Seca debut, drove the opening stint of the race from the back of the field after he and the team elected to change tires after qualifying.
“We can’t complain,” Knox said. “First outing for the team and the first full outing for us doing everything ourselves. It was my first time here and there was just not enough time to learn the track. I didn’t get enough practice time, but I think I ran my fastest lap during the race, so that was good.  Everything went pretty smooth, so we’re pretty excited about that, and we were able to make the entire race to the finish.”
Knox pitted halfway through the two-hour race to turn the Viper over to Skeen in what was the duo’s first time co-driving together.
“Everybody did an awesome job,” Skeen said. “We’re all a little disappointed because we think we should do better, but I think that’s what will get us better results down the road. We all want more so we’re going to get more. We showed signs of strength, we had a great pit stop and Dan did a great job with the driver change in the first stint. We’ve got a lot of good pieces and it’s just a matter of fitting them all in the right spot.”
Familiarity and more experience with the Viper GT3-R in full IMSA GTD specifications should improve the team’s overall performance later in the season. 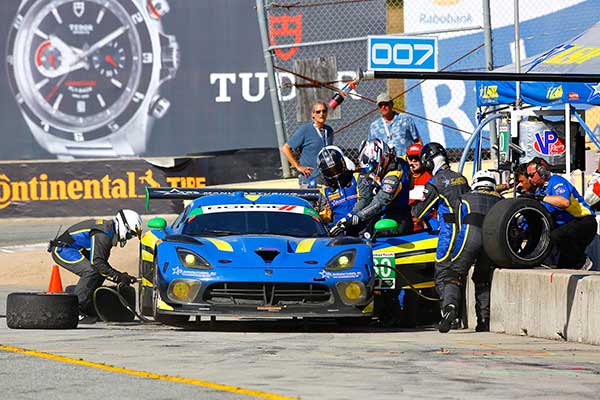 “We do want to improve the car and make it better,” Knox said. Mike was right there on pace but, unfortunately, our car after 30 minutes started losing the back end. It was harder and harder to drive from that point on and we were just trying to play catch up.”
Skeen, who turned the fourth fastest race lap in the GTD class just minutes into his stint, felt the Viper fall off later in his run.
“We are maybe a little bit behind on our knowledge of the car on the Continental Tires and how to setup for a full-stint distance,” Skeen said. “I think our car came in a little too quick and went off too quick today. Both stints were pretty strong early on and then faded, so we’ll put that knowledge in the bank and move forward. Hopefully we’ll get a little bit more testing again before the next event at Road America, which is a track that should suit our car a bit better too.”
In addition to Laguna Seca, other confirmed races this season for Knox, Skeen and Lone Star Racing include the Continental Tire Road Race Showcase at Road America, August 5 – 7, the Oak Tree Grand Prix at VIR (Virginia International Raceway), August 26 – 28, and the Lone Star Le Mans at COTA (Circuit of The Americas), September 15 – 17.
“We are excited, looking forward to our next race, and can’t wait to get back in there,” Knox said.
Noteworthy
– Top personnel from Riley Motorsports, which also builds the Viper GT3-R through Riley Technologies, worked with Lone Star Racing’s main team members at Laguna Seca. “Our team had some help from Riley Motorsports with a group of very skilled and highly trained guys that helped us put this together,” Knox said. “It helped everything go so smooth, and without their support it would have been a lot more challenging. You can’t ask for any better, it worked out and we’re happy to have them. Hopefully we’ll have them through the rest of the season.”
About Lone Star Racing: Based at Motorsport Ranch within the greater Dallas-Fort Worth area in Cresson, Texas, Lone Star Racing is in its third season campaigning the No. 80 ACS Manufacturing Dodge Viper GT3-R. The team is running a four-race IMSA GT Daytona (GTD) program in 2016 after debuting in the class with a seventh-place finish last year at Circuit of The Americas (COTA). Although Lone Star Racing is new to IMSA, its team members have won races across North America spanning sprint and endurance racing formats. The crew has worked together on many different teams and various types of cars, developing a strong bond and proven capability that gives them a competitive and winning advantage. The team races with the support of primary partner ACS Manufacturing, Inc. (www.acsmanufacturing.com). Look for Lone Star Racing and Dan Knox on Facebook and follow the team on Twitter @LSRTeam.