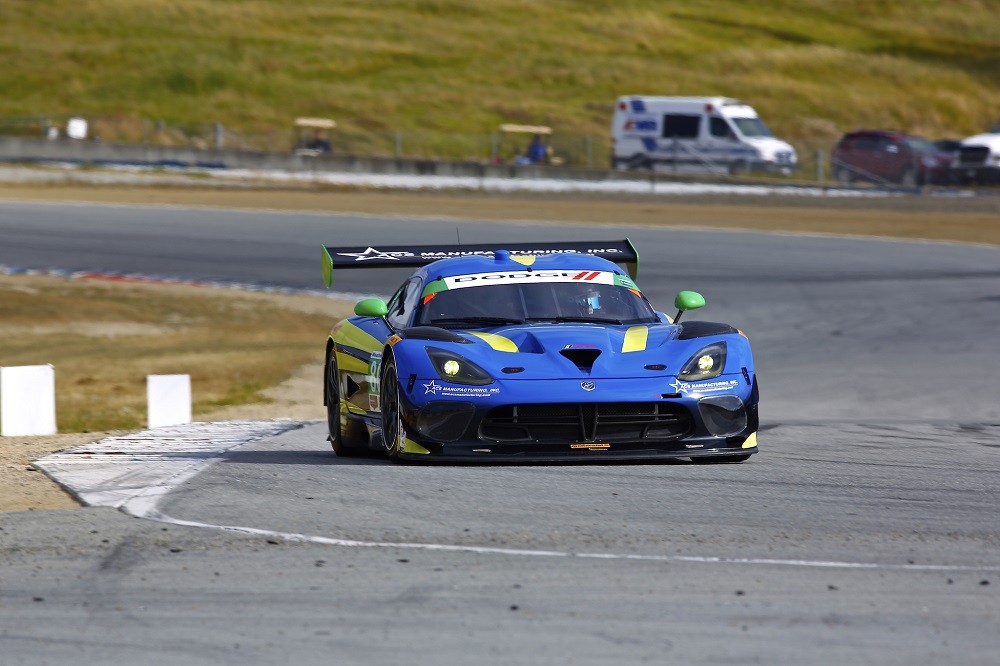 Solid 2016 Debut Race Weekend for Knox, Mike Skeen and Lone Star Racing at the Continental Tire Monterey Grand Prix
MONTEREY, California (April 30, 2016) – Dan Knox and Lone Star Racing will make their first race start of the 2016 season Sunday at Laguna Seca from the eighth row on the grid for the Continental Tire Monterey Grand Prix in the No. 80 ACS Manufacturing Dodge Viper GT3-R.
Co-driving with Mike Skeen, Knox and Lone Star Racing are launching a four-race 2016 IMSA WeatherTech SportsCar Championship this weekend in the competitive GT Daytona (GTD) class.
Knox improved throughout Saturday’s qualifying run, ultimately turning his top time of 1:29.825 (89.694 mph) on his 10th and final flying lap of the 15-minute session.
“I’d like to have more time on the track for sure,” Knox said. “It’s a very difficult track, low grip and a lot of tight, unusual turns. The car is good, still have some room to get better, but we’re excited. It’s out first time out and we’ll get better.”
Knox and Skeen are co-driving together for the first time.
“Dan is learning quickly,” Skeen said. “This is his first time at the track so every lap we can give him is important, that’s why we ran him the whole session during qualifying. Our biggest step is getting a good clean race under our belts, having a good start for the whole team, and then we’ll get to a track that suits the car a bit better.”
Lone Star Racing’s team this weekend, led by Team Manager and Lead Engineer AJ Petersen and Car Chief Mike Lopilato, also has a familiar fly-in crew and several key members from Riley Motorsports.
“So far everybody is gelling really well together,” Skeen said. “We are working on and moving forward on the setup each time we go out. We are pretty happy with it and we’re all having fun too, which is important.” 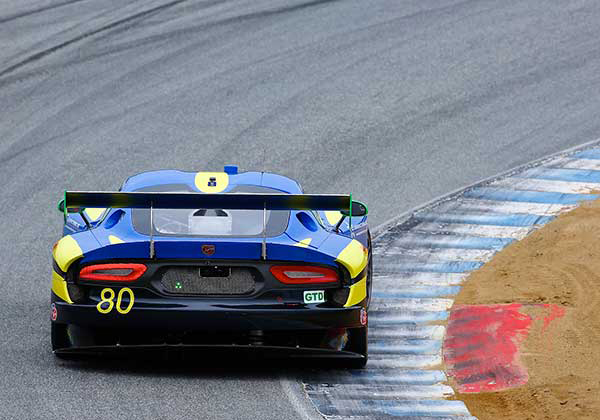 Sunday’s race schedule starts with a final warm-up session at 1:50 p.m. that will give Lone Star Racing one final chance to fine tune the No. 80 Viper’s setup.
“Getting the grip with the car is the biggest challenge,” Knox said. “The car doesn’t have the high down force as some of the other cars, and we’re just having some trouble getting the down force and the grip that we need in the turns.”
The third race on the 2016 schedule for the IMSA WeatherTech SportsCar Championship’s GTD class, the two-hour Continental Tire Monterery Grand Prix can be seen live on FOX Sports 2 (FS2) tomorrow, Sunday, May 1, at 6:30 p.m. EDT. The green flag is scheduled to fly at 3:45 p.m. PDT local time.
In addition to Laguna Seca, other confirmed races this season for Knox, Skeen and Lone Star Racing include the Continental Tire Road Race Showcase at Road America, August 5 – 7, the Oak Tree Grand Prix at VIR (Virginia International Raceway), August 26 – 28, and the Lone Star Le Mans at COTA (Circuit of The Americas), September 15 – 17.
About Lone Star Racing: Based at Motorsport Ranch within the greater Dallas-Fort Worth area in Cresson, Texas, Lone Star Racing is in its third season campaigning the No. 80 ACS Manufacturing Dodge Viper GT3-R. The team is running a four-race IMSA GT Daytona (GTD) program in 2016 after debuting in the class with a seventh-place finish last year at Circuit of The Americas (COTA). Although Lone Star Racing is new to IMSA, its team members have won races across North America spanning sprint and endurance racing formats. The crew has worked together on many different teams and various types of cars, developing a strong bond and proven capability that gives them a competitive and winning advantage. The team races with the support of primary partner ACS Manufacturing, Inc. (www.acsmanufacturing.com). Look for Lone Star Racing and Dan Knox on Facebook and follow the team on Twitter @LSRTeam.