Ending The Summer With PWC 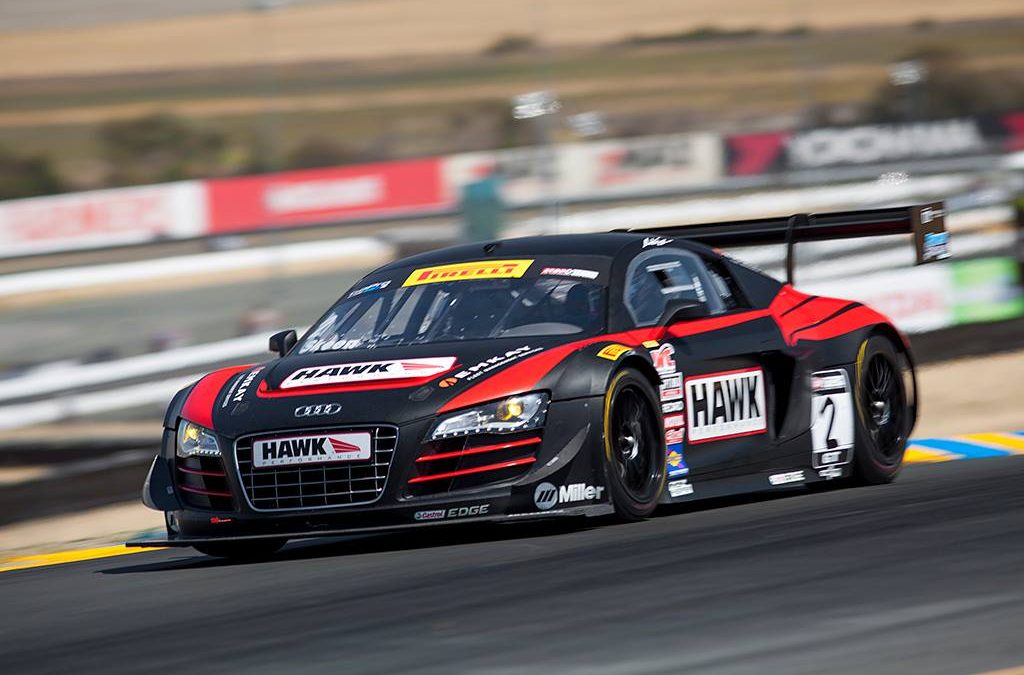 After good finishes at Road America and Toronto that put us back into championship contention, we had three weekends to battle for the big prize.  We went to Mid-Ohio Sports Car Course in early August, Raceway Sonoma at the end of the month, and Miller Motorsports Park in early September for the finale.

Mid-Ohio looked promising as the smooth surface, tight corners, and short straight proved to serve our Audi quite well.  We qualified on pole for Race 1 and lead for the first 20 minutes or so, but then the rains came down and we circulated under caution.  As the rains got heavier, our team made the decision to pit for wet weather tires, but the race was red flagged and never went back to green.  We were scored in third place as we had crossed the timing line on our pit-in lap.  In Race 2, we started and ran in second place behind Dalziel in the Effort Racing Porsche and scored some pretty good points against championship contender O’Connell.

Sonoma was another course that we expected to treat us well.  On the practice days we were very quick in the morning sessions, so we knew we would be strong in qualifying, but were a little worried about race pace in the afternoons.  We managed to qualify on the pole for Race 1 and had a solid start.  We were pressured for the whole race by Dalziel and one of the Bentleys, but managed to hold on for another win.

Unfortunately, our fast lap time was a bit slow as expected and we ended up starting Race 2 in 5th place.  This made us vulnerable to the quick-starting Cadillacs that were close behind.  Sure enough, Johnny managed to sneak through into Turn 2, nudging us off track in the process.  This set the tone for the whole race, which had us hounding the Cadillac, but getting pushed off track at every opportunity.  Eventaully, very near the end of the race, I finally had an over-under move complete in the hairpin at Turn 11, but Johnny made contact with our left rear wheel at the exit and we had a flat tire that dropped us down the field.

While we were disappointed to fall from 7 points to 42 behind the lead, we still were hopeful that we could get it done at the championship finale doubleheader at Miller.  We knew we would be vulnerable on the long straight, but thought that we could make up the time in the corners around the rest of the course.  We managed to qualify on the front row, with Bentleys surrounding us for the start of Race 1.  However, we broke an axle on the launch and coasted into pit lane, taking us out of contention for the Driver’s Championship.  Still, we had a shot at the Manufacturer’s Championship for Audi, so the guys hurried to install a new axle and get us back on track so that we could set a time to put us on the grid for Race 2.

We managed to do just that, but by the time we made it out, the track was very dirty and cars were spread out, making for lots of traffic.  We set 8th fastest time, right behind the two Cadillacs, making for a head-to-head battle for the title.  I had an excellent start to pass a few cars ahead of us as well as Andy Pilgrim in one of the Caddies.  However, it quickly became evident that we would struggle more than expected down the front straight, and really didn’t even have enough power to defend when the other cars were anywhere close behind us—they could drive all the way around us and take the defensive line into T1.

On the whole, the Miller weekend was a devastating blow, but you don’t lose a championship in one weekend.  We had to play catch up for the whole year after starting St. Pete in the GT-R and then switching to the Audi without any testing completed.  While we had strong finishes throughout the year, it was really the second half that even put us on the radar for the championship.  Hopefully I’ll have the opportunity to fight for it from the beginning in 2015!