Return to the Indy Roval 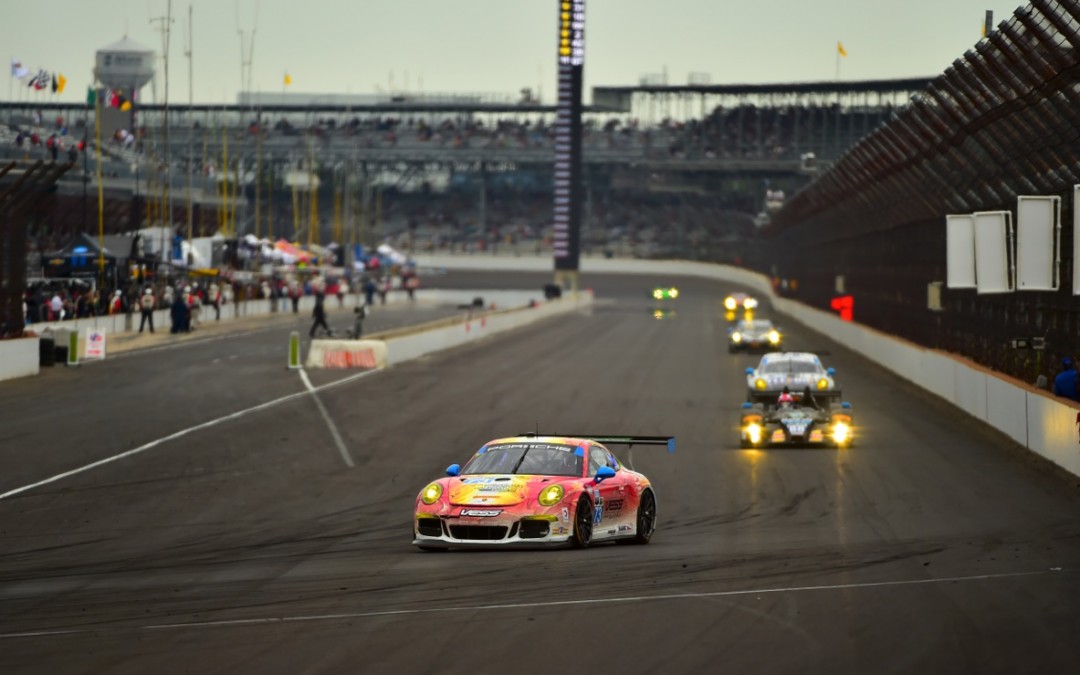 As I was racing last week in Toronto, I got a call from a good friend of mine, Patrick Lindsey, saying he might need a co-driver the following weekend for the IMSA TUDOR United Sports Car Series event at Indianapolis Motor Speedway.  Lindsey previously drove with me and CRP Racing in the Hawk Performance Corvette during 2011, and has since been driving a Porsche with Park Place Motorsports.  I was also his team mate last year for a few events where I co-drove with Mike Vess in GRAND-AM.

The call was a bit of a surprise, but I was excited to drive in IMSA and to try out the new 991 Porsche GT America.  The event at Indy is very short due to the combination weekend with NASCAR.  We would have two practice sessions and qualifying on Thursday, with a warm-up and race on Friday.  As we got started on Thursday morning, the car suffered from a lot of oversteer, and we rushed to make changes during and between sessions with our limited time.

As qualifying came around, we were still trying to perfect the setup.  The car was a bit lose, and we were off the pace–qualifying down in 15th place.  Although that was a bit discouraging, we still had some ideas to improve the car for when it really mattered.  We were also very confident in the Park Place Motorsports superb brain trust calling the strategy on the pit box and the crew’s ability to do quick pit stops.

After a long morning with driver meetings, a fan walk/autograph session, and other activities, we were finally back on track for a 15-minute warm up session at 2 pm.  Patrick drove the whole session and we were encouraged by the pace and improvements with the car.  As we finished up, the Continental Tire Sports Car Challenge took to the track and we had a couple hours to go over the car and finalize our strategy.

As our race start neared, the skies were dark and the radar was showing lots of rain coming towards us.  We had a couple sprinkles before the race, but the storms never really materialized.  We were prepared to put rain tires on at the grid, but the need never arose and we were able to start on a dry track.

Patrick was starting the race and had to be in the car for a minimum of 60 minutes to score points.  We had several early yellows, but we were not in our fuel window and Patrick was making good progress through the field, so he stayed out.  Near the 45-minute mark, there was another yellow that put us in our fuel window, so Patrick came in for tires and fuel, with the plan that he would remain in the car until we could make the finish on one more stop.

However, this caution took longer than expected due to track repairs and we were still yellow after the 60-minute mark.  Because of this, most of the GTD cars would be coming in to do their driver changes, so we decided to come back in and do the same to remain on the same pit sequence.

As I began my stint, there was a lot of action with some faster class cars mixed up back in the pack.  We lost some ground early on, but managed a very quick green lap average pace and began to gain some position on consistency.  My stint was relatively uneventful until the last half hour when Jan Heylen, in the always competitive #58 Porsche, spun and rejoined the track behind us.  I had to drive extremely hard to keep him behind us, but managed to do so and bring home a Top 10 finish.

Although not what we were hoping for at the beginning of the event, the crew really hustled all weekend to improve the car and they made some excellent pit stops to help our cause. The Top 10 was a nice improvement from our 15th place start, so we’ll take it and move on.  Patrick’s normal co-driver, Kevin Estre, will return from European racing duties to be with the team in Road America, but I’m hoping to be back in a Park Place car before the end of the season.