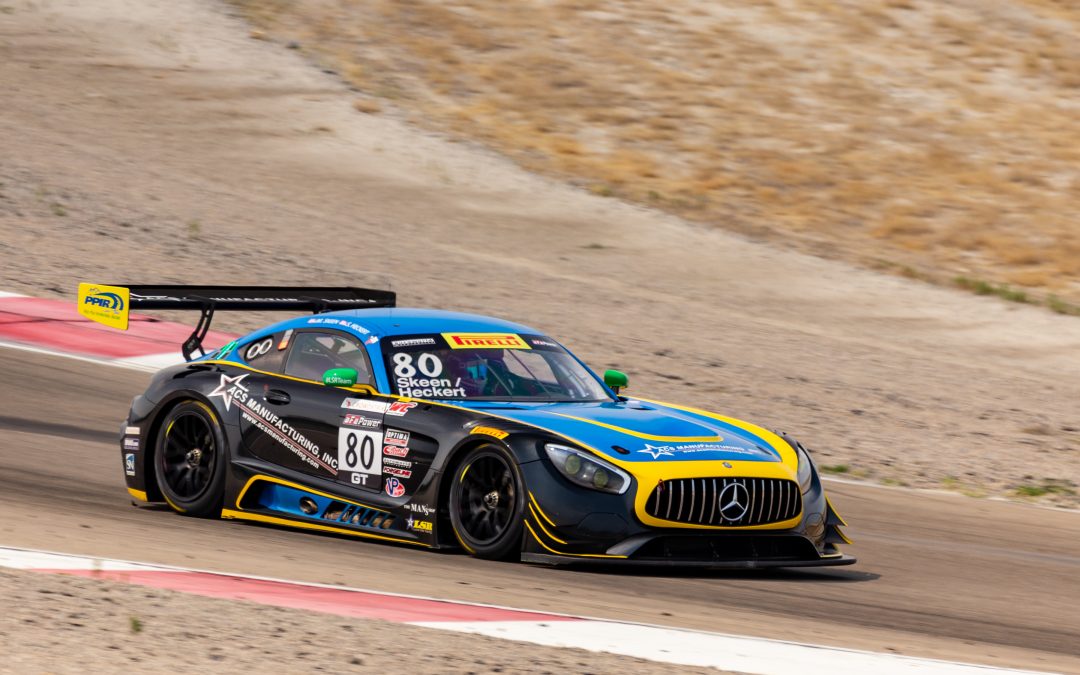 – Mike Skeen and Scott Heckert Improve to Second in GT Pro Sunday after Third-Place Showing Saturday in No. 80 ACS Manufacturing/Lone Star Racing Mercedes-AMG GT3
– Skeen Leads First Half of Sunday’s Race After Competitor Penalty Gives Him and Lone Star Racing Third Pole Starting Spot of Season
SALT LAKE CITY, Utah (August 13, 2018) – ACS Manufacturing and Lone Star Racing pulled off a Pirelli World Challenge podium sweep for the second time in 2018 this weekend at Utah Motorsports Campus (UMC) where team co-drivers Mike Skeen and Scott Heckert finished third on Saturday before improving to second in the final one-hour SprintX GT race of the weekend on Sunday.
The double-podium showing capped a solid weekend of competition for Lone Star Racing on the 3.048-mile road course that saw Heckert qualify fourth on Saturday and Skeen led the opening half of Sunday’s race.
“We came into the weekend knowing we had a good Mercedes-AMG GT3, a good team and that we could execute well,” Skeen said. “We were just hoping for a good, clean weekend, no mistakes, and ended up having good race pace. We executed well and found ourselves on the podium each day, so we can’t complain.”
Skeen jumped to the lead at the drop of the green flag Sunday after starting from the pole for the third time this season. Originally slated to roll off from the outside front row, Skeen was moved to first after the original P1 starter was penalized.

Skeen also started first in Memorial Day’s race at Lime Rock Park and won his first pole in the season-opening race at Circuit of The Americas (COTA) in March.
“I am extremely proud of everybody on the team,” said Lone Star Racing Team Manager AJ Petersen. “A lot of work takes place before we even get to the track to make event weekends smooth, like they have mostly been this year. We came here to Utah and everybody just did their jobs. We maximized what we had by minimizing our mistakes, and then had a Balance of Performance (BoP) adjustment before qualifying that made us 100% competitive.”
The UMC sweep gave Lone Star Racing a total of five podium finishes in eight Pirelli World Challenge races so far in 2018. The solid record includes a Sunday victory at VIRginia International Raceway (VIR) in April.
In addition to the VIR win, Skeen and Heckert co-drove to second and third-place finishes at COTA for their first podium sweep of the season.
Heckert scored his first career Pirelli World Challenge victory at UMC in the GTS class two years ago and is now a podium-perfect three-for-three in his last three races on the Utah track.
“This result really goes to show a lot about the Lone Star Racing team,” Heckert said. “AJ Petersen and the crew do a really good job. If we go to a race, we are going there to win, and we make sure we are prepared to every extent. We expect to show up and do well. We have had some great success in a relatively short period of time. That really shows a lot about this team, I am grateful to Dan Knox, AJ and everyone at Lone Star for giving me this chance, and I truly appreciate the opportunity.”
Noteworthy
– Knox joined his teammates for the UMC race and took in the action from the team pit stand on Saturday. He earned the first Pirelli World Challenge win for Lone Star Racing in GTA-class competition at the Detroit Grand Prix in 2014, but this season Knox selflessly stepped out of the car and into team owner role to give Heckert a chance behind the wheel of the Lone Star Racing No. 80.
– “I wish we could have come home first place for Dan while he was here, but we did everything we could,” Petersen said. “It was a great result, and we are not walking away from here disappointed.”