Pole And Double-Podium For LSR 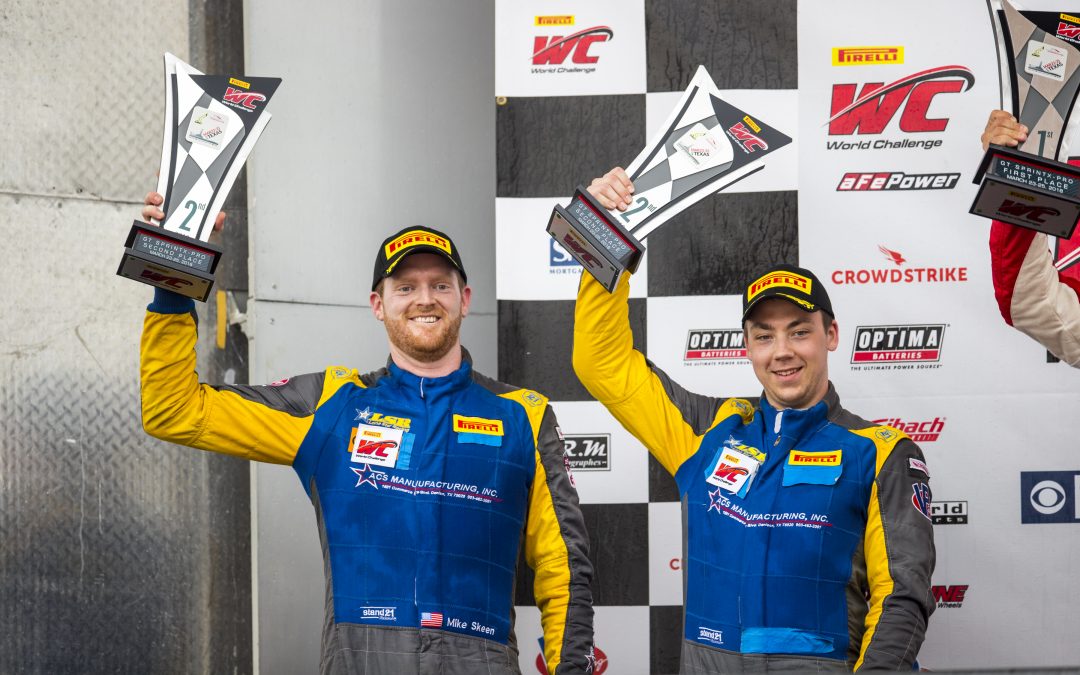 – First-Time Driver Pairing of Mike Skeen and Scott Heckert Score Second and Third-Place GT Pro Finishes in Pirelli World Challenge SprintX Doubleheader
– Skeen Wins Lone Star Racing’s First Pirelli World Challenge Overall Pole Saturday in Qualifying
AUSTIN, Texas (March 26, 2018) – Lone Star Racing and team drivers Mike Skeen and Scott Heckert combined to win the pole and score a pair of podium finishes this past weekend at Circuit of The Americas (COTA) in a breakout performance for the No. 80 ACS Manufacturing/Lone Star Racing Mercedes-AMG GT3 team in the opening rounds of the 2018 Pirelli World Challenge SprintX Championship.
On the pace from the first laps of Thursday’s test session straight through finishing second in Sunday’s second and final one-hour GT-class SprintX race, Skeen, Heckert and the Lone Star Racing team made a strong 2018 debut that will likely set the tone for the remainder of the season.
“The whole weekend went really, really well,” said Skeen, who drove the No. 80 to the GT pole position in Saturday morning’s qualifying session. “We certainly had a lot of unknowns coming into it, having limited experience with Scott and some of the new crew guys, but everyone did a fantastic job. We had great performances in both races and it is exciting to get off to a good start with this program this season.”
Skeen led the first half of Round 1 on Saturday from the pole before handing off to Heckert, who battled in the lead pack throughout his stint and to an eventual third-place finish.
Heckert in turn drove the opening shift in the No. 80 in Round 2 on Sunday and promptly passed several competitors from sixth on the starting grid in the charge into Turn 1 at the race start. He worked his way up to second before handing off to Skeen, who defended the runner-up position to the checkered flag.
“It’s realistically the best results we could have asked for coming into the weekend,’ Heckert said. “Working together as a whole unit for the first time, it has been a long time since I have been in action, and it was my first time at COTA. I kind of came into the weekend on a steep learning curve from my end, and Mike was a big help in climbing that curve. This really is a great reward for the entire team’s efforts. I couldn’t be happier for them.”
While Skeen and Heckert, who was making his Pirelli World Challenge GT-class debut, were racing together for the first time, both the drivers and the No. 80 team never missed a beat in the solid weekend performance.
“The crew had several late nights making the car really good, but it paid off,” Skeen said. “Everybody on the team is happy, and everybody in the paddock knows we were here. Scott did a fantastic job both days but really showed himself well on Sunday. He had an awesome start and earned the Hard Charger Award, so good on him.”
Heckert’s quick run to the front and fast start earned him both the VP Fuels Hard Charger and Optima Batteries Fast Start Awards in Sunday’s race.
“For the first race weekend it went great,” said Lone Star Racing Team Manager AJ Petersen. “We maximized performance from the car, drivers and the crew. We always have a team that gets along, we enjoy racing together, going out to dinner afterwards, we just enjoy spending time together. It makes races even easier and race weekend’s like these even more enjoyable. This weekend was just so satisfying and makes up for some of the memories from last year when we were so close but didn’t get the results.”

Top GT driver Skeen is in his third year with Lone Star Racing while Heckert, a former Pirelli World Challenge race winner who competed in 2017 in a Mercedes-AMG GT3 in Europe, is filling-in for Lone Star Racing team owner and driver Dan Knox at COTA and next month’s SprintX rounds at VIRginia International Raceway (VIR).
“It’s been a lot of hard work over the last six to eight months, putting our 2018 racing program together, and we are not finished by any means,” Petersen said. “It’s a really great start, there was a lot of effort put towards this event, as always, and it was great to be rewarded with results. We have to thank Dan Knox, his family and ACS Manufacturing for all of the support. Mike Skeen, Scott Heckert and the entire crew never let up for a minute all weekend and we are going to keep that effort and momentum going.”
Rounds 3 and 4 of the Pirelli World Challenge GT SprintX Championship will be held at VIR, April 27 – 29.
Noteworthy
– Heckert was quick to thank everyone on the Lone Star Racing team that helped him get the ride in the No. 80. “I basically came to the team on a recommendation from Mike, and it goes a long way to see the amount of trust Dan and AJ had in me to put me in their car and try to go get a result for them,” Heckert said. “That’s what makes standing on the podium both days so sweet.”
About Lone Star Racing: Based at Motorsport Ranch within the greater Dallas-Fort Worth area in Cresson, Texas, Lone Star Racing is competing in the No. 80 ACS Manufacturing/Lone Star Racing Mercedes-AMG GT3 for the second season in 2018. Lone Star Racing and its team members have won races across North America spanning sprint and endurance racing formats. The crew has worked together on many different teams and various types of cars, developing a strong bond and proven capability that gives them a competitive and winning advantage. Lone Star Racing competes with the support of primary partner ACS Manufacturing, Inc. (www.ACSManufacturing.com). Look for Lone Star Racing and team owner/driver Dan Knox on Facebook and follow the team on YouTube at Lone Star Racing, on Twitter and Instagram at @LSRTeam and on the official team web site at www.LoneStarRacingTeam.com.