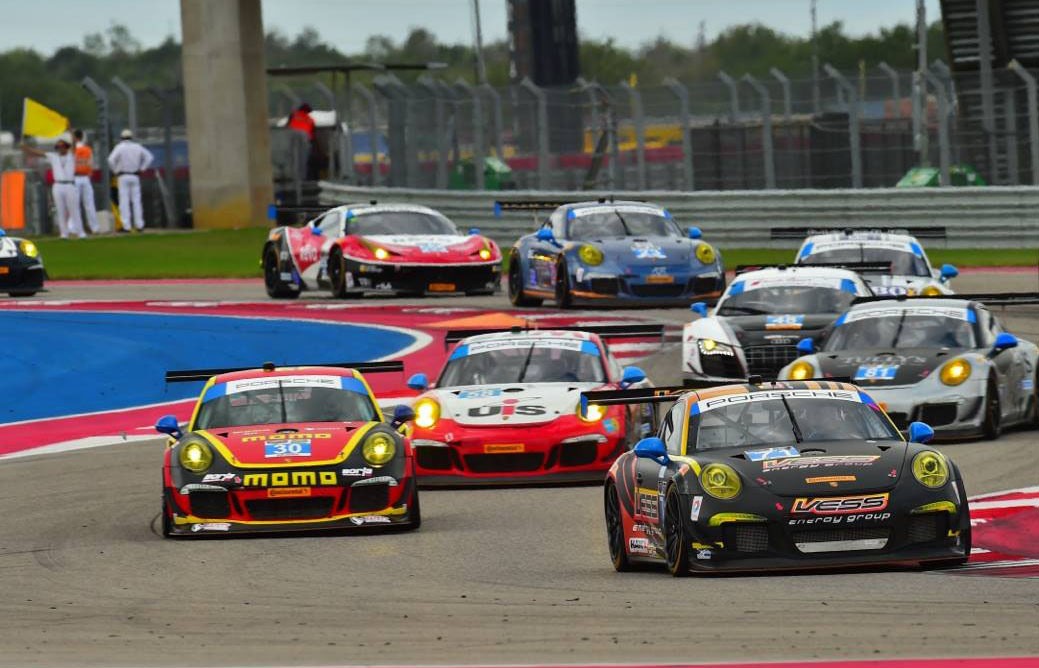 Although the Pirelli World Challenge season is over, the racing is not done this year! I was happy to be invited to the Lone Star Le Mans event at Circuit of the Americas to race again with Mike Vess in a Park Place Motorsports Porsche.  We had the opportunity to drive together at Daytona, COTA, and Barber last year, so this was a reunion of sorts.

The Porsche 991 GT America in GTD trim just received some Balance of Performance changes allowing more front downforce options for the teams in the TUDOR United Sports Car Series, which was promising for the fast bends and heavy braking zones found at COTA.  Our Park Place team mates consisted of Patrick Lindsey and Norbert Siedler–an ace European Porsche pilot that I was excited to work alongside.

Our weekend consisted of a practice session on Thursday afternoon, followed by two more on Friday before a late-afternoon qualifying session.  Several of our practices had damp, but drying track conditions that saw us at or near the top of the time sheets.  The cars were working exceedingly well and Vess was gaining speed every time out.

Most of the times in practice were in the high-2:09 to low-2:10 range, so we expected we would need a low 2:09 in qualifying to be near the pointy end of the grid.  When the time came, I followed Norbert out of pit lane in the #73 and we put our heads down.  First time across the line I saw a 2:08 and knew we were looking good!  I made a few more attempts, but was not able to better my time after that magic lap on the tires was gone.  At the end of the session, we found ourselves in 4th place and fastest of the Porsches–the team was ecstatic!

Our race strategy was for Mike Vess to take the green and maintain the car for the first stint before I took over to finish out the race.  I ended up taking over roughly 30 minutes into the race, but we unfortunately lost a lap early on and would have to fight our way up from the rear of the field.  We had one full course caution shortly after I started driving, but that would be it for the remainder of the race.

I had a few nice battles on track, including a little dice with Andy Lally in the #44 and Jan Heylen in the #58 Porsches, but most of my race was spent without much GTD traffic around.  My first stint was cut a bit shorter than we expected when I got a fuel stumble in Turn 2, but I didn’t think much of it at the time.  Unfortunately, our final stint was cut short as well, only our fuel pick up issue kept me from making it all the way back to the pits.  I was left stranded at Turn 11 for the rest of the race to have a beverage with the welcoming corner marshals.

Although the race didn’t end as we had hoped, the Park Place Motorsports crew did a fantastic job all weekend giving us and our team mates some very fast Porsches.  I was happy with my performance in the car and look forward to doing some more events with IMSA again soon!