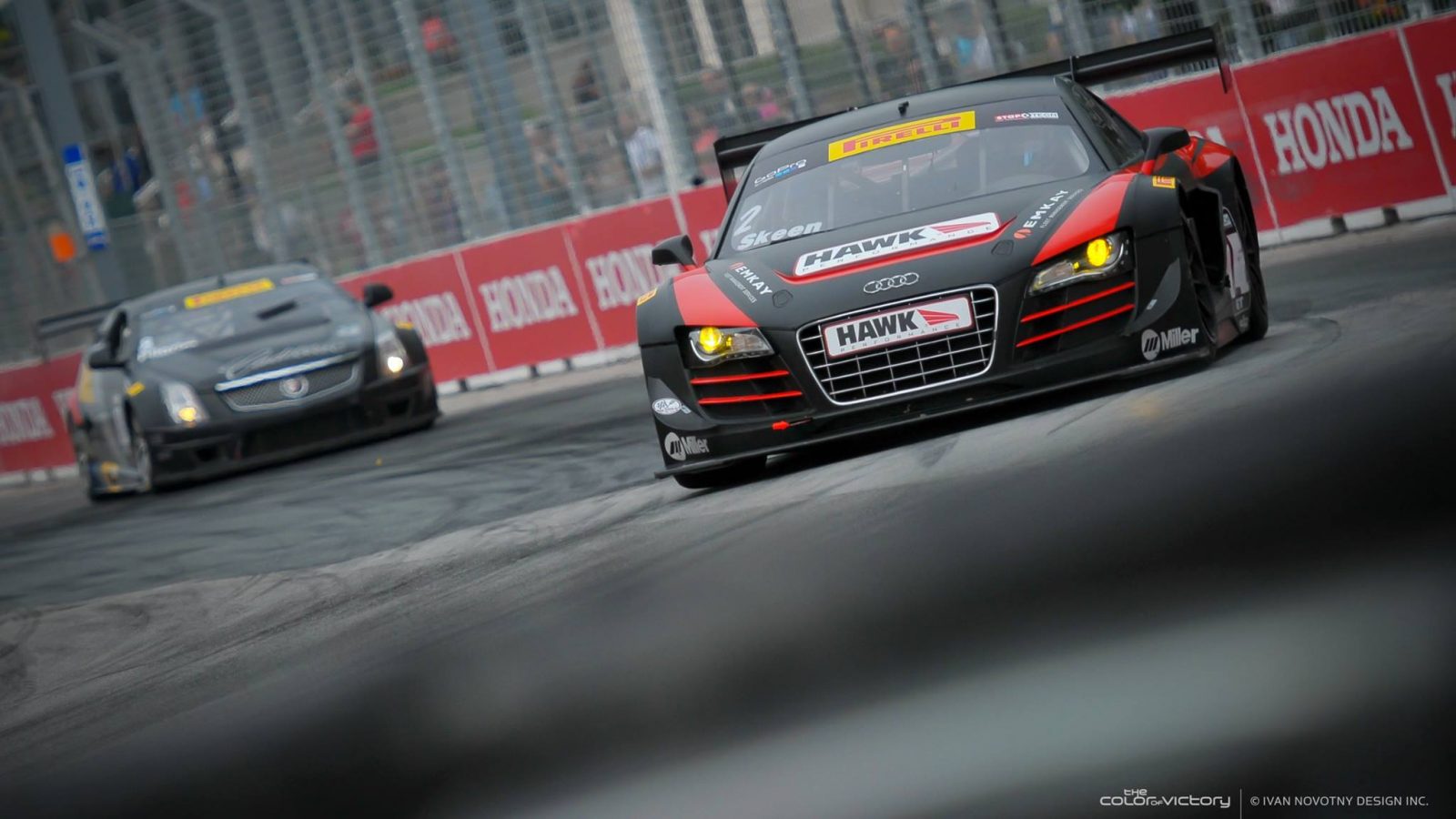 As we are now into the second half of the 2014 Pirelli World Challenge season, a lot has changed in the GT ranks, especially for our Hawk Performance/CRP Racing team. Those that have been following along will remember that we changed to an Audi R8 after the season had already begun, so we had to learn quickly to get up to speed. After our successes at Road America, we are well and truly in the championship hunt and our primary goal is narrowing the gap to the points leader, O’Connell.

The Toronto schedule was pretty tight, with two practice sessions and qualifying on Friday, then a race each day that weekend. Our setup was similar to what we had tried in Detroit, but it never felt quite right and we were still making significant changes up to qualifying. Fortunately, we hit the nail on the head for that session and put the car fourth on the grid—ahead of the Cadillacs and better than we really expected.

At the start, the Porsche was out front, followed by Wittmer’s Viper and Lazzaro’s Ferrari. Johnny had an excellent start as usual and was able to get a few positions, while I was stuck on the outside and fell back two spots. I made an outside pass into turn 3, regaining one spot, but was getting hit on several occasions.

We only had one green flag lap before going full course yellow, and the restart was a bit messy because the leader, Tandy, was unfamiliar with the restart procedure in this series. Most of my race was spent chasing Lazzaro, with a brief battle between myself and Thorne in the KPAX McLaren. A late yellow came out to pack up the field yet again, and the restart was a bit hectic because of the late decision to go green as we came around to start/finish. There was still debris on the circuit, so it was pretty unexpected, but I think in the end everyone was happy to finish under green.

I made a move on Lazzaro on the restart, which was very tight with the lap traffic that was in the way, but it stuck and I was able to pull a gap to the cars behind as they battled it out. I had a good run to chase down Johnny, but didn’t have time to make a pass anywhere with the tight corners. We had already had a rough day with lots of contact, so I thought it best to live and fight another day. We had minimized the points deficit to Johnny and secured fastest lap for Race 2, so we were happy with fourth, all things considered.

Sunday dawned with rain and everyone was scrambling because of a last minute schedule change that moved our race up from 12:30 pm to 9:15 am. Everyone was looking at the radar and watching track conditions carefully, but the track was very nearly dry by the time we started. The series made the call to do a rolling start given the damp paint on the front straight. We had a good start and held position through Turn 1, but the Viper just drove right around us on the first straight. I held off the Porsche for a few laps, but as I got held up, he got close and made an aggressive move into T1 that I thought would take him and the Viper out of contention. They got away with it, but were racing each other very aggressively, so we just followed and watched. After a few laps, I got caught out by a GTS car I had to avoid in the braking zone at T3, and Lazaro snuck by us. Soon after that, the Porsche spun trying to pass the Viper, and we were back into podium position.

While we were again the fastest car by lap time, we didn’t have the straight line speed, so we just took what we could get. Looking at the big picture, we were well ahead of Johnny, so we were happy to finish third, score points, and move on. We were on the podium in Toronto, spraying champagne just like last year.

The season is quickly coming to an end with only a few rounds remaining. As I sit in Indy for the IMSA race, I can’t help but get excited for the Mid-Ohio rounds of PWC. That track has always treated us well, including my debut race that we won in 2010, and I expect it will be very good for our Audi as well. Following Mid-Ohio, we move on to Sonoma, then Miller Motorsports Park, both of which should great for the GT3 cars. It will be a tough battle to win the championship this year, but I think we have a strong car and a great team that can make that a reality.

In case you missed the first Road America broadcast, it will re-air on NBC Sports Saturday, August 2nd at 12:30 am. The Toronto races will air on NBC Sports Sunday, August 10th at 1:30 pm. If you can’t wait until then, you can watch all the past races on www.world-challengetv.com.

Make sure to subscribe online for all the latest!