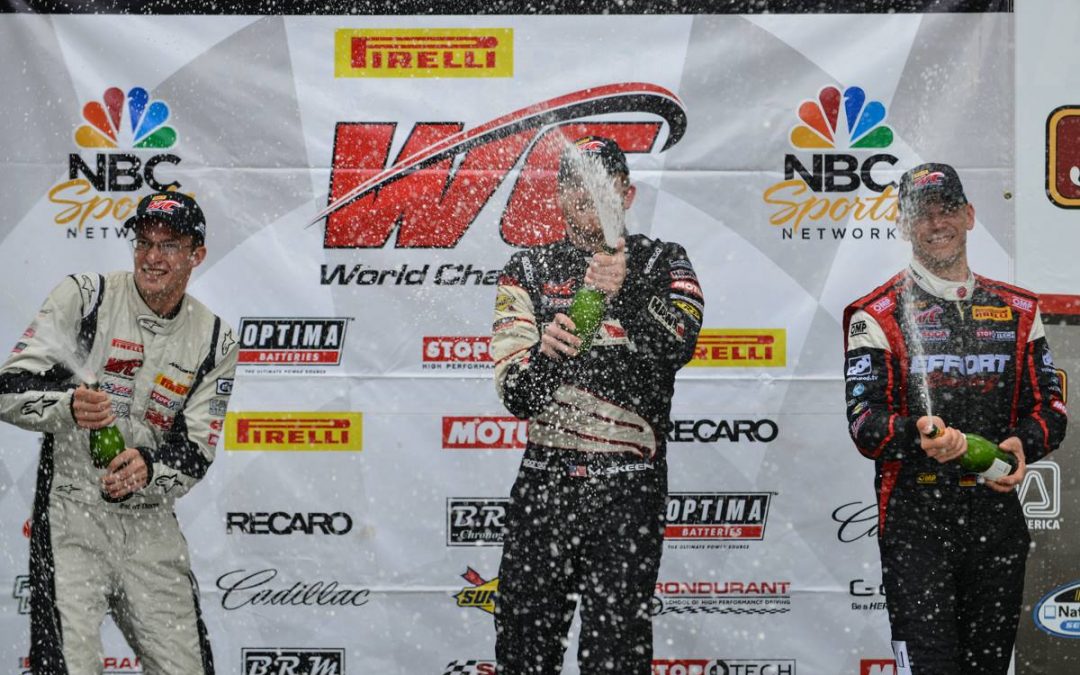 MikeSkeen.com Headquarters, Charlotte—After a long absence from the podium, Skeen launched to the top, finishing first in both Pirelli World Challenge races this weekend at Road America.

According to Skeen, CRP Racing had major breakthroughs on the test day, “We’ve now had enough time with the car to really work on the nuances that get the most speed out of this platform.”

“We were disappointed we didn’t get to qualify in the rain, but we made the best of the 5th place start on Friday and battled back to the front. It’s always great to finish first, but earning the win by battling through the field makes it that much sweeter.” Skeen earned more than just a win, he fought hard with Andy Pilgrim for first which gave him the Cadillac CTS-V Move of the Race award and he set the fastest lap of the race to earn the pole position for Saturday’s race.

Unfortunately, Saturday’s race was interrupted by a long caution leaving Skeen with a tough battle with Johnny O’Connell in the final 10 minutes. Skeen managed to sneak past Johnny O in Turn 8 to grab the Cadillac CTS-V Move of the Race award again, as well as the fastest lap.

“I’m really happy to get these two wins for everyone at Audi, Hawk Performance, and CRP Racing. I think we can maintain this level of execution throughout the rest of the season and be championship contenders. We might be the only team to have passed Johnny O on track all season, and Cadillac was nice enough to give us an award for doing it!” exclaimed Skeen.

Although the wreck caused a lengthy caution period, we are happy that both drivers in the incident on Saturday, Anthony Lazzaro and Alex Figge, are doing well and we wish them a speedy recovery.

The Audi is getting tucked back into her bed for a few weeks while Skeen and CRP Racing take the Hawk Performance Nissan GT-R out west to compete in the Pike’s Peak Hill Climb for the first time. He’ll be back in the Audi for the Streets of Toronto July 18-20.

The NBC Sports broadcast of both races will air Friday, July 4th at 6:30 PM. In case you can’t wait until then, check out the onboard video from Race 1 and 2!