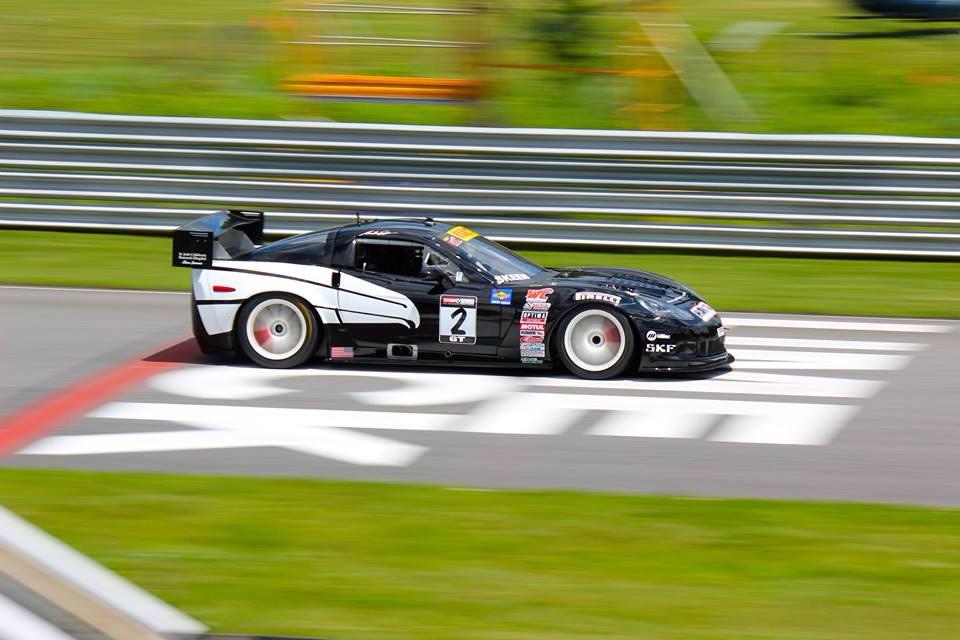 Skeen took his first win of the year in the No. 2 Hawk Performance Chevrolet Corvette for CRP Racing. His most recent wins came at Canadian Tire Motorsport Park in Mosport last year, when he swept the doubleheader race weekend there. Skeen led the last 45 laps in the 49-lap, 50-minute race, and averaged 88.945 mph.
He advanced from third to first past the pair of Cadillac CTS-V.Rs that had started on the front row. On Lap 5, Skeen passed polesitter Johnny O’Connell, of Flowery Branch, GA, in the No. 3 Cadillac Racing Cadillac CTS-V.R for the lead as the field was already into traffic. The move secured Skeen the Cadillac CTS-V Move of the Race Award.
“We had a great start, and just followed Johnny into Turn 1,” said Skeen. “I got in front of Andy and followed Johnny as best we could. We then caught some traffic – he chose right, I chose left – and from there it was about bringing it home. The yellow didn’t help when we caught it, because we didn’t have the car to get too far in front of them. But we ran a really clean race.”
Andy Pilgrim, of Boca Raton, FL, in the No. 8 Cadillac Racing Cadillac CTS-V.R passed his teammate O’Connell for second place on the last lap, on the final straight. Pilgrim paid tribute to the cleanliness of the race, as there was only one yellow flag interruption.
“He had a little bit of traffic ahead and momentum carried me by,” said Pilgrim. “I couldn’t lift anyway; I also had to be conscientious of the Manufacturer’s Championship for Cadillac. I want to say to the GTS guys, thank you, as everyone did a phenomenal job for 40 minutes. Some held us up more than others but I want to thank them all for looking in their mirrors. I hope we have a great race like that tomorrow.”
O’Connell ended third ahead of two drivers who had a good battle for fourth. Duncan Ende, of Los Angeles, CA, equaled his best result of 2013 in fourth place in the No. 24 STANDD.org/Merchant Services/GMG Audi R8 LMS, with Randy Pobst, of Gainesville, GA, fifth in the No. 6 K-PAX Racing Volvo S60. GT points leader James Sofronas, of Villa Park, CA in the GMG/Swisher Racing/Mobil 1 Audi R8 LMS, started and finished sixth.
O’Connell, who set the fastest race lap, will start on the Motul pole for Round Nine on Saturday at 10:35 a.m. (EDT).
Aschenbach was involved in another Camaro-on-Camaro battle for the GTS class victory. Driving the No. 10 Blackdog Speed Shop Chevrolet Camaro, Aschenbach passed Andy Lee for his third victory of the season, with the winning move securing him the Invisible Glass Clean Pass of the Race Award.
Lee, of Colorado Springs, CO, in the No. 20 Best IT/Bondurant/Crown Seven Chevrolet Camaro, started on pole but dropped back after getting caught up in traffic. The dust-up allowed Aschenbach and Jack Baldwin, of Marrietta, GA, in the No. 73 Motul/StopTech/Foametix Porsche Cayman S, to jump ahead.
Aschenbach held off the challenge from his rivals from there. He’ll also start on the Motul pole for Round Nine on Saturday after setting the fastest lap in Round Eight.
“Hats off to the Blackdog Speed Shop and Camaro guys first off, because we struggled a bit yesterday, but the guys kept digging,” said Aschenbach. “The biggest thing today was keeping our nose clean. I think Andy got screwed up and we both got by. Traffic can be so unpredictable, and you need to commit and go to get through the field.”
Lee made it past Baldwin for second but was looking for more after his third runner-up finish of the season, his second to Aschenbach (Round 4, at Circuit of the Americas).
“It started out with a bit of bad luck, got pushed a bit off track and went from first to third,” said Lee. “We had to work back cleanly from there. Later on we just kind of got an unlucky break. I pushed a little too hard and made some mistakes. We’re looking forward to a better race tomorrow.”
Baldwin held onto third after a fierce battle with Tom Long, of Raleigh, NC, in the No. 60 LotusUSA/Taggart Autosport/LRR Lotus Exige. The result could give the points leader a restart of his podium streak, because he finished each of the first six races in the top three and only finished off the podium for the first time at Round 7 in Detroit.
“You know, it almost worked out today,” said Baldwin. “It was tough for me because I had a really good car; I thought I had the winning car. These guys in front of me did a nice job. We’ll be ready for tomorrow.”
Mark Wilkins, of Toronto, Ontario, in the No. 38 KIA Motors America KIA Optima and Peter Cunningham, of Milwaukee, WI in the No. 42 Acura/HPD/RealTime Racing Acura TSX completed the top five. Cunningham improved from seventh on the grid to fifth place.
Alec Udell, of The Woodlands, Texas, in the No. 17 Motorsports Development Ford Mustang Boss 302R, took home the Sunoco Hard Charger Award after an excellent drive from 24th on the grid in the 25-car class to eighth place.
“It’s been a long two days for us,” said Udell. “The crew was up until the crack of dawn. They got the motor together and up and running. It was a long, hot, and intense race. I had a lot of fun because it was clean racing, with almost no touches.”
Wilkins’ teammate, Nic Jonsson, of Sweden, in the No. 36 KIA Motors America KIA Optima improved from last in the 25-car class up to 12th, and secured the Optima Batteries Best Start Award.
Nick Esayian, of San Diego, CA, in the No. 34 HPD/Acura/RealTime/Red Line Oil Acura TSX, was involved in an accident on lap 29. Esayian was OK after the incident and will race on Saturday.

Through eight of 14 races, Sofronas leads O’Connell by 118 points, 925 to 807, in the GT class points standings. The battle for third is very tight as Pobst is just one point ahead of Pilgrim, 755 to 754. In GTS, Baldwin leads Wilkins by 96 points, 864 to 768. Cunningham ranks third with 650 points, just five ahead of Aschenbach on 645, and Lee eight back on 642. Udell minimized his points damage with his result, and ranks sixth on 608 points.

Round Nine is scheduled for Saturday, July 6 at 10:35 a.m. (EDT). All races will be streamed live at www.world-challengetv.com and then aired on the NBC Sports Network July 20 at 4 p.m. (EDT).

More information on the series can be found at www.world-challenge.com or on Twitter @WCRacing.