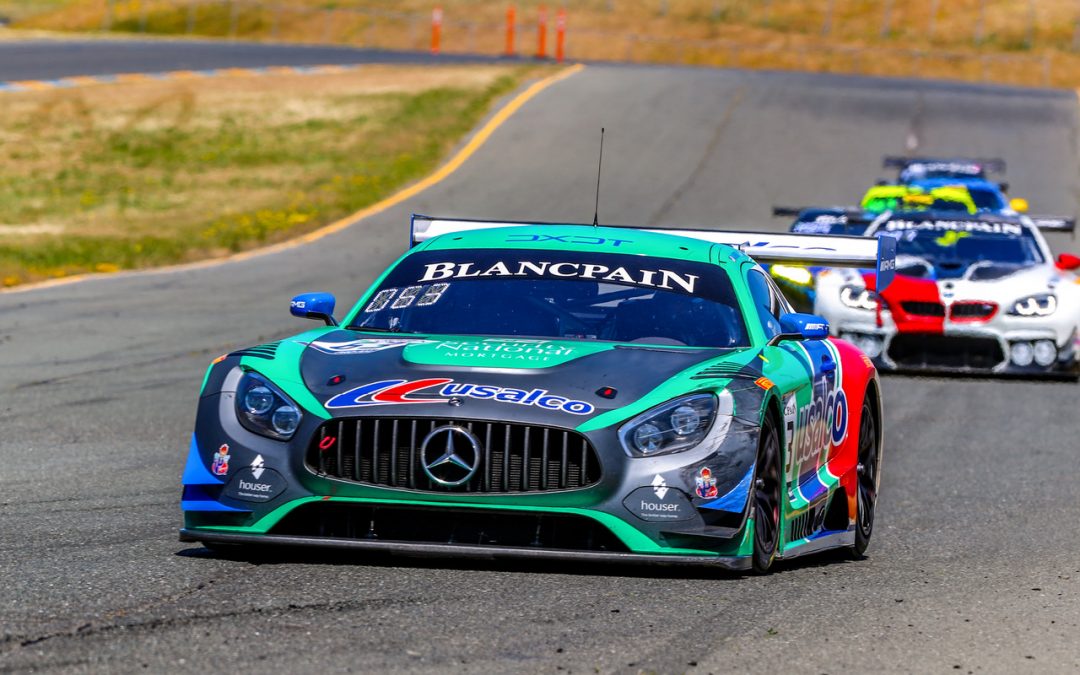 DXDT Racing brings a four-race run of podium finishes to Sonoma Raceway this weekend where its two-car Mercedes-AMG GT3 team looks to add to the tally of top-three race results and score its first Blancpain GT World Challenge America victory in a doubleheader schedule of twin 90-minute races, June 7 – 9.

Rounds 7 and 8 of the 2019 Blancpain GT World Challenge America schedule, Saturday’s opening race of the weekend is scheduled to start at 2:45 p.m. PDT Sunday’s second and final 90-minute race is set to go green at 11:15 a.m. PDT.
Competing in the Pro-Am division, each DXDT Racing entry has been driven to second and third place finishes over the course of the last two Blancpain GT World Challenge doubleheader race weekends.

DXDT Racing team owner and driver David Askew, and co-driver Ryan Dalziel, earned the team’s most recent podium showing in Round 6 last month at Canadian Tire Motorsport Park (CTMP) in the No. 63 USALCO/Security National Mortgage Mercedes-AMG GT3.
Askew and Dalziel raced to a season-best second-place finish in that Sunday race at CTMP, but the No. 63 squad looks for more success in Sonoma with a different driver lineup.

Askew co-drives this weekend with top World Challenge competitor Mike Skeen as a one-race replacement for Dalziel.
“Going into this season it was always known that Ryan wouldn’t be able to do Sonoma,” Askew said.

“Years ago, Ryan had promised his best friend that he would stand up in his wedding no matter the date, and the date fell on the Sonoma weekend! I’ve watched Mike in the Mercedes-AMG GT3 for the last couple of years, and of course he has had great success. It made a lot of sense for Mike to fill in for Ryan,  and I really look forward to working and driving with him.”

Skeen won in World Challenge GT competition at Sonoma in 2014 in addition to a series victory in a Mercedes-AMG GT3 last year at VIR. He also co-drove a Mercedes-AMG GT3 to the win in a 24-hour race at Circuit of The Americas (COTA) last November.

“Having won at Sonoma in the GT ranks before, I look forward to helping take the No. 63 to the front for two solid finishes this weekend,” Skeen said. “It’s evident the whole DXDT Racing program is very strong, and Ryan has helped David maximize his performance, so I hope to step in and do the same this weekend.”

The No. 04 CrowdStrike/AWS/DXDT Mercedes-AMG GT3 team finished third in Saturday’s Round 5 at CTMP, just one race after a second-place finish in Round 4 on Sunday at the VIRginia International Raceway (VIR) doubleheader in April.

“Racing at Sonoma in the No. 04 CrowdStrike/AWS/DXDT Mercedes-AMG GT3 is certainly a highlight of the season,” said No. 04 team driver Colin Braun. “As a driver, the track presents a variety of challenges, but I feel like we are ready for it! We’ve had two podium finishes in the last two races and we’re looking to build on that at Sonoma. The track itself is a fan favorite and is known for its great viewing spots, which is perfect since CrowdStrike will have a ton of folks out for the race. We’ve been working really hard and hope to capture that first win for CrowdStrike in Sonoma!”

DXDT’s four-race podium run began with a third-place finish by Askew and Dalziel in the No. 63 in Round 3 of 2019’s championship Saturday at VIR.

“We’ve had some decent finishes so far this season and we look to continue,” Askew said. “I think the team continues to improve, and we’ve all been working very hard, so a win is inevitable!  That being said, it’s a tough crowd that we run with.  Everyone wants to win as much as the next guy, so we just need to keep digging.”

Skeen believes the Mercedes-AMG GT3 will be right at home at Sonoma.

“The Mercedes-AMG GT3 is typically very good in the fast, sweeping corners and brake zones, so I expect the car to do very well with the flowing nature of the Sonoma circuit,” Skeen said. “The shorter straights should mean we won’t give up as much pace to the cars that are good in a straight line.”

Both 90-minute races Saturday and Sunday, and qualifying Saturday at 10:50 a.m. PDT, will be streamed live on gt-world-challenge-america.com. Sunday’s Round 8 weekend finale also airs live on CBS Sports Network.

–    Askew makes his race debut at Sonoma this weekend. “I’ve only driven at Sonoma once, and that was a test last month in a Super Trofeo car,” Askew said. “I really like the elevation changes, especially the uphill into turn one.  I had almost no time at CTMP, and none in a GT3 car, and I got the hang of it and ended up with decent pace.  I’m going into Sonoma with the same attitude, which is to work closely with Mike and just work up to it slowly.  It’s a long weekend.”