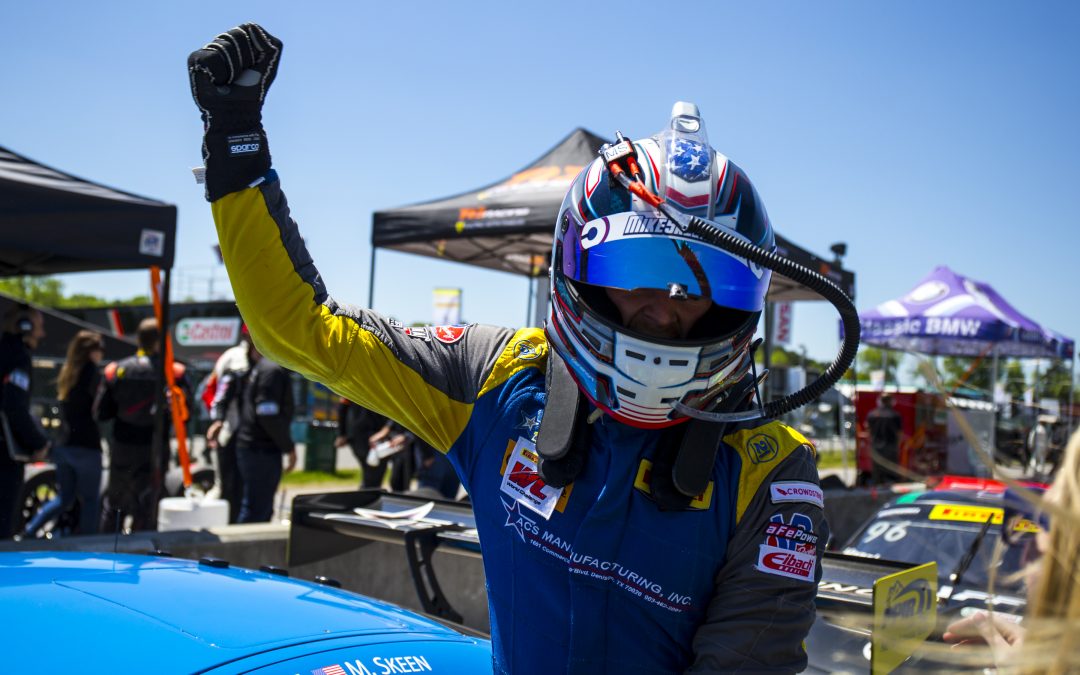 DANVILLE, Virginia (May 3, 2018) – After just missing the pole in qualifying and being hit with a hard-to-take penalty Saturday at the start of this past weekend’s first Pirelli World Challenge SprintX GT race at VIRginia International Raceway (VIR), the No. 80 ACS Manufacturing/Lone Star Racing Mercedes-AMG GT3 team went into Sunday’s final race determined to score a victory.

When the checkered flag waved, the No. 80 team, and co-drivers Mike Skeen and Scott Heckert, accomplished exactly that, combining impeccable pre-race preparation, a perfect pit stop and flawless driving for the team’s first win of the 2018 season.

“I caught up to the leader with the help of some traffic,” said Skeen, who drove the No. 80 to the finish. “He got a little slowed up but I had to follow for a few laps because they had a little more straight-line speed, so I knew I had to find a tricky place to make it work. I got close enough to him going into Turn 4 to make a run and dive it down in there. I am glad it worked. It was incredibly exciting and very fulfilling and just created a flood of emotions for everyone on the team to end the weekend on such a positive note.”

On Saturday at VIR, Skeen was within minutes of winning his second-straight Pirelli World Challenge SprintX pole in qualifying only to be edged for the top spot by just .088 of a second at the end by another Mercedes-AMG GT3 competitor.

Skeen took the green flag from second on the grid later on Saturday afternoon for the first one-hour race of the weekend. He had a great start but a brush with another competitor that was merely an opening-lap “racing incident” wasn’t viewed that way by series officials. The No. 80 was called to the pits for a lengthy stop-and-hold “incident responsibility” penalty that took away any chance of a race win or top finish.

“Going into every race weekend we expect challenges and problems to overcome, and this weekend we absolutely overcame them all,” said Lone Star Racing Team Manager AJ Petersen. “We handled ourselves like gentlemen and worked hard not to get caught up in the drama of Saturday’s incident. We accepted the penalty given during the race and worked really hard to put it behind us and settle it on the track and show the character of this team.”

Heckert started Sunday’s race in the No. 80 from fifth on the grid and immediately jumped to fourth on the opening lap. He stayed in the lead pack throughout his stint and, in a perfectly timed pit stop halfway through the one-hour race, Heckert handed the No. 80 off to Skeen.

Returning to the track just behind the overall leaders, Skeen went on a charge on the 3.27-mile VIR circuit that the nearby Charlotte, North Carolina considers his favorite and “home” track. Skeen steadily moved to the front and pulled off the winning pass in the run through Turn 4 just under three minutes from the end of the race.

“We had good, long-run pace, I was doing qualifying laps the whole stint and the car was incredibly consistent and fast,” Skeen said. “It was awesome all the way to the end. The crew did a great job preparing the car, maximizing the setup and doing a perfect pit stop. Scott had an awesome starting stint and then it was just my job to go hunt down the last couple of guys. I was able to get a pass done for the lead right at the end and it was great.”

Skeen and Heckert scored the VIR victory in just their second race together with Lone Star. They earned second and third place GT Pro finishes in their co-driving debut in March’s season-opening Pirelli World Challenge SprintX weekend at Circuit of The America (COTA), putting together a solid record of three podium appearances in the year’s first four races.

“This win is truly a credit to the team and how hard they’ve worked,” Heckert said. “The car was flawless, our pit stop was right at the target time and we had great strategy. My goal was to pick up a few spots and chase down the leaders as best I could. I had a lot of confidence that Mike could get the job done from there, and he did just that.”

Sunday’s win was the first for ACS Manufacturing/Lone Star Racing since team owner and driver Dan Knox won in the Pirelli World Challenge GTA class at Detroit in 2014. The VIR triumph was also the first overall and GT Pro class win for Lone Star Racing in any series.

Knox stepped out of the No. 80 for the year’s opening pair of races at COTA and VIR, giving his seat to Heckert and letting Lone Star run an all-Pro GT driver lineup for the first time.

“We are all very thankful to ACS Manufacturing and Dan Knox for giving us the opportunity to compete,” Petersen said. “Our main goal with the VIR weekend was to back up our previous results from COTA and continue to establish ourselves as contenders at events. We want to do this in a way that best represents the ACS Manufacturing and Dan Knox family values of character, integrity and excellence, on and off the track. This weekend we were absolutely successful in executing those values and then turning them into victory.”

“We had a lot of friends and family out here, I love this place, it is very close to my home in Charlotte,” Skeen said. “We knew coming into this weekend we had a really good car. We wanted to make the most of it, qualified up front but then to lose out so early in Saturday’s race, it was really frustrating. To come back, battle it out and finish up front with a nice, clean car at the end is awesome. The team really buckled down, looked ahead and made everything come together.”

– The Saturday race penalty incident involved unintentional contact between Skeen and the Bentley of Alvaro Parente. “We all felt really bad to see the damage done to the Bentley,” Petersen said. “We were also very relieved to see that Alvaro was unhurt. I believe the incident was one that had shared responsibility as it was two cars going for the same track position.”

– Heckert is now one of the only drivers – and perhaps the first and only – to win at VIR in both sports car and stock car competition. He first won at VIR in the NASCAR K&N Pro Series East in 2014.

– No one on the team is surprised by this season’s early success for ACS Manufacturing/Lone Star Racing. “Lone Star Racing has always had good equipment, good people on the team and a great car in the Mercedes-AMG GT3,” Skeen said. “Having Scott onboard has been really positive and I think everything has kind of gelled this year. To bring it all together in a complete package, where you can race at the front and be contenders every weekend, is something we knew we could achieve.”

– Also serving as a team engineer and strategist, Petersen recalls every second of Sunday’s breakout win. “I was very impressed with the performance of the ACS Manufacturing/Lone Star Racing team as a whole,” Petersen said. “On Sunday, Scott had an excellent start and made up positions on the outside of Turn 1 and continued to push through his stint with quick and consistent laps to keep us in touch with the overall leaders. We decided to pit as soon as the window opened as the pit lane was clear and the team executed a near perfect 75.7 second stop with 75 seconds as the minimum. This stop cut our gap to the No. 2 Mercedes-AMG GT3 by four seconds. Mike went to work reeling them in, which was easier because they had a problem, and then Mike caught the leader and showed great patience in planning and executing the pass. It was perfect.”