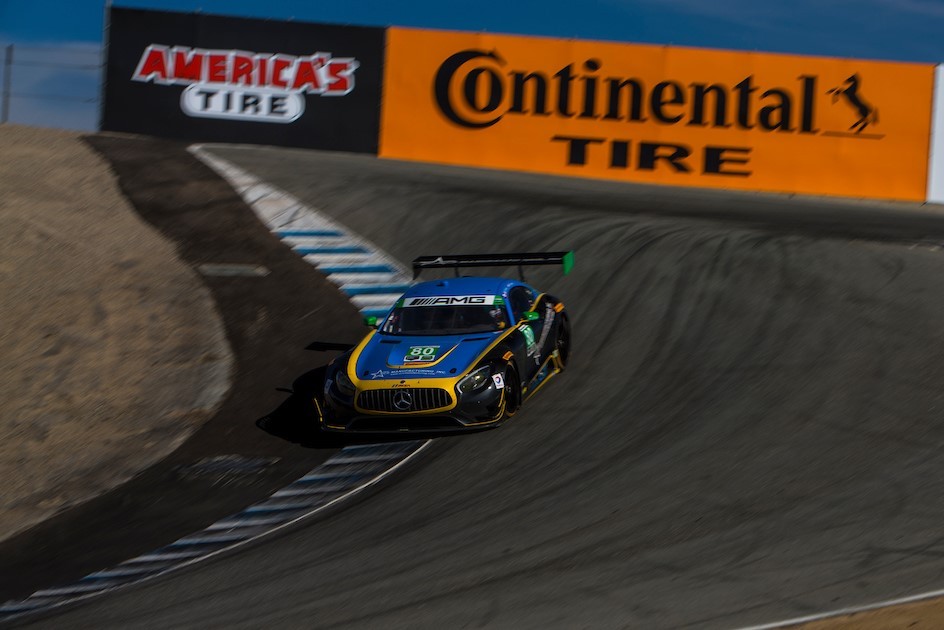 MONTEREY, California (September 26, 2017) – Overcoming an unintentional but costly bump-and-run contact incident from another competitor in the race’s opening hour, Lone Star Racing and team co-drivers Dan Knox and Mike Skeen persevered to the finish Sunday in the No. 80 ACS Manufacturing Mercedes-AMG GT3 in the Continental Tire Monterey Grand Prix at Laguna Seca.

Knox, Skeen and the Lone Star Racing crew never quit pushing forward in the challenging two-hour and 40-minute IMSA WeatherTech SportsCar Championship race but were hoping to leave Laguna Seca with a race result more in line with the pace and performance the team showed all weekend.

After Knox qualified 15th on Saturday, Lone Star was looking for the team’s first top-10 result of the season in the final event of a 2017 schedule comprised of four select races.

Instead, the early hit in Laguna Seca’s famous Corkscrew – which resulted in a penalty for that competitor – took away the team’s early momentum. The No. 80 went a lap down and, in a race slowed by just one yellow-flag caution period, the Lone Star Racing drivers and team never had a chance to make up any ground, crossing the finish line in 15th place.

“We got a yellow that helped us get back on the lead lap, but then we were off sequence on tires and just couldn’t really do anything to get back another lap,” Skeen said. “From there it was basically just going around, hold pace and hope for the best, hope we might get a yellow and make something of it, but it never came.”

The Lone Star Racing team did show significant improvement in pit stops and overall execution, a stated goal of the team heading into the Laguna Seca weekend.

“The Lone Star Racing guys had great pit stops,” Skeen said. “We didn’t lose anything there, they were nice and consistent and the car was pretty solid. We had pretty decent pace compared to the other Mercedes-AMG GT3s, but we got hit and a little behind in the first stint and were just playing catchup from there.”

“We just kept fighting, hoping and praying for another caution that would have helped us get a wave around and get a lap back,” Petersen said. “We never counted ourselves out but just kept digging. We are learning more and more every race and every lap that we turn and we’ll reset, regroup and look forward from here.”