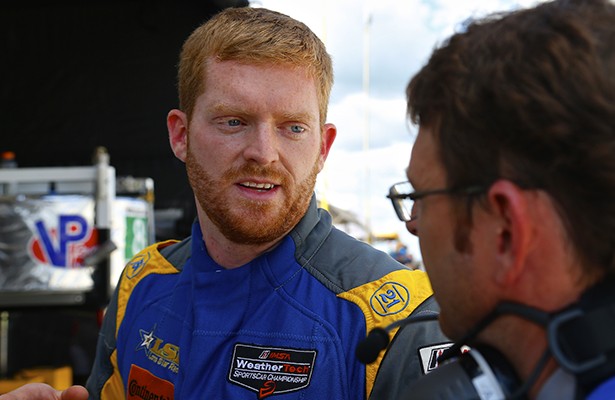 What has been one of the biggest challenges of jumping in the GTD class for a partial-season program?

“I think our challenges are our own, which would be faced in any class. We have a lot of good people and the right equipment, but like any team, it is more difficult to have everything gel and become second nature when you are not practicing together on a regular basis.

“That being said, the level of competition is obviously extremely high in GTD, and therefore, anything less than optimal can leave you down the order in the final results despite high points or good performance in some areas.”

How has the team grown and developed since you first started working with them at Mazda Raceway Laguna Seca?

“I think the whole team is comfortable working with each other and respects what everyone can do, which is an important aspect. We are just learning from our mistakes and have already improved a fair amount in our first two races.

“I think it will be very helpful getting back to another race without the long break we had after MRLS. Everything is still fresh in our minds from Road America. At VIR, I think we will be able to come off the trailer strong and hit the ground running as things will happen more naturally.”

VIR is your home track. Tell us a little about the circuit and the challenging aspects of it…

“Not only is VIR my home track, it would be one of my favorites even if it were on the other side of the world. I love the old-school feel to it, as if someone literally drove a tractor through a field and said ‘this looks cool.’ It wasn’t drawn on a computer and I think that gives it more character.

“The elevation changes, the fast Uphill Esses and the downhill section from Roller Coaster through Hogpen are all a lot of fun. It’s a beautiful facility with great areas for the fans to watch as well.”

How does the Dodge Viper GT3-R compare to other GT3 cars you’ve driven before?

“The Viper is a great car and almost feels more like a traditional GT car as compared to some of the other GT3s. You feel a little more roll and mechanical grip from the chassis even though it has pretty decent downforce. The front engine layout is also more like the Trans-Am cars that have been a mainstay of American sports car racing.

“The mid-engine GT3s are often more pinned down and dependent on the aerodynamics. They almost feel more like prototypes.”

What are your expectations for COTA, given it will be the team’s home race?

“COTA is a fun track, Austin is a great city to visit, and I always look forward to going there. I think the team will really enjoy being in front of the home crowd, and having extra guests out to support everyone will be great. I’m sure Dan [Knox] is excited about going to a track he is more familiar with, so hopefully that will pay dividends for us throughout the weekend.”

If you were IMSA President for a day, what one thing would you change in the WeatherTech Championship?

“I think one of the biggest things I would focus on is making the racing easier to follow for the casual fan. Primary to doing that would be creating a two-class structure, one prototype and one GT class. I know it has been tough to keep all the stakeholders from two series happy throughout the merger, but it looks like we are ultimately headed in that direction now.”