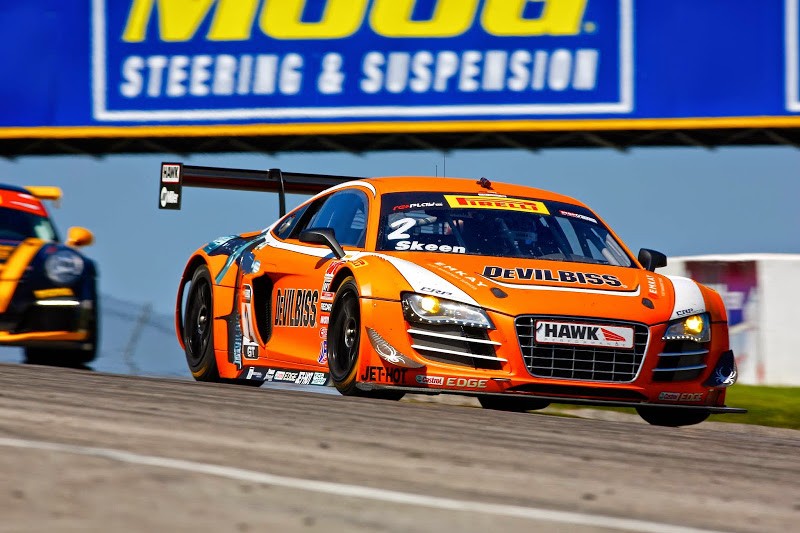 I was excited about returning to Canadian Tire Motorsports Park since the Pirelli World Challenge schedule came out for 2015 because the track is one of my favorites in North America.  It was also the site of many wins for us at CRP Racing and we expected it to suit our Audi fairly well because of the fast corners that benefit from high downforce.

As we arrived and started testing on Thursday, our pace looked respectable and we were even P2 in official practice on Friday morning.  However, when qualifying rolled around we found out how much the other teams had been sandbagging when the pace dropped by nearly a second.  We only went one tenth faster than practice, which would put us P10 on the grid for Race 1 on Saturday.  That’s a pretty disappointing pill to swallow when your car is really well-balanced and you get a good enough lap that you should be in contention for pole position.  Our car simply did not have the acceleration for the long, uphill back straight away.

Our first race was a rolling start this weekend, and we were on the outside line behind the Cadillac of Andy Pilgrim.  I had a good jump and had a peak to the outside as we went into Turn 1, which turned out to be a good lane and I was able to make up some spots right off the bat to secure P7.  The green was short-lived, however, as we went full course caution before we completed the lap.

The restart gave us another opportunity to move forward and we were able to get by one of the Bentleys, but he quickly powered by us on the first trip up the Andretti straight.  From there, we started to settle in for a longer green run with Montecalvo behind and the Bentley in front.  It stayed this way for most of the race until we caught GT Cup traffic and there was an accident as the leaders went by one of the lapped cars.  This would set up one more restart with a very short run to the checkered flag.

On the restart we got a good run as the field went three wide in front of us.  One of the Bentleys made contact with Beretta, which slowed him and Thorne to his outside.  I was able to slip by both cars and slot into P5, which we held until the clock ran out.  This was an excellent result considering the pace of our car, and most of the cars ahead of us in the points were behind us on track, letting us close the gap.

Our fast lap from Race 1 qualified us P8 for Sunday, but we would have a standing start this time. Our initial launch was quite good and I had a run on Davison, but he closed the door and we went two wide with Thorne through turn one.  Once everything sorted out we had lost one position and I had Montecalvo pressuring from behind again for the first few laps of green. We had another early yellow that was relatively quick as they retrieved Ziegler’s BMW from the exit of turn one.

On the restart, the accordion effect worked well for us as all the cars out front got stacked up and gave us a good run right as the field went green.  I was able to go to the outside and drive around a handful of cars like they were standing still.  Again, one of the Bentleys drove right back around us on the straight, but as we entered Turn 8, Estre and Beretta made contact ahead of us and we were able to slip through.  A lap later, Davison and one of the Bentleys made contact in Moss corner, giving the GT-R a flat tire and us another position.

The remainder of the race went green and we had Heitkotter in the other GT-R keeping us honest from behind as the Cadillac and a pair of Bentleys pulled ahead to secure the podium.  It was difficult sorting through traffic with a few local yellow incidents in our way, but we managed to keep just enough of a gap to the GT-R that we never had to battle directly.  Another Top 5 and a solid points day was a welcomed result from the weekend.

Next up for the Pirelli World Challenge GT series will be the streets of the Detroit Belle Isle circuit in two weeks.  Stay tuned for more!