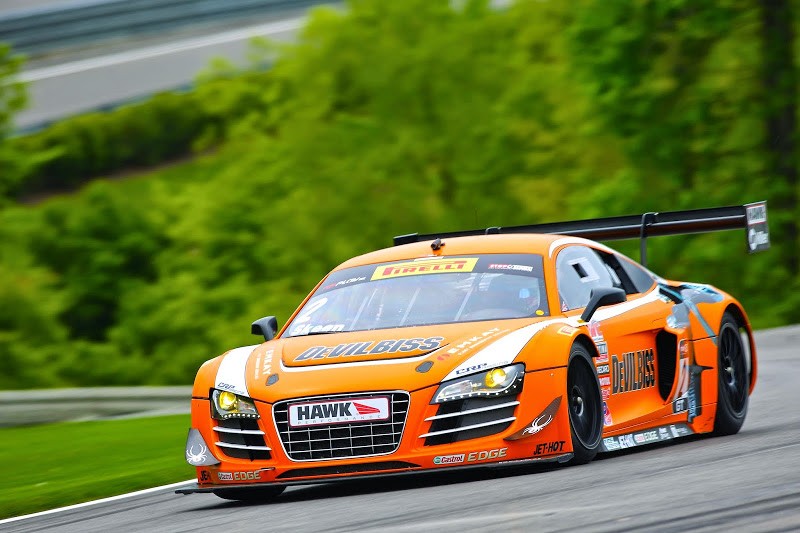 The Pirelli World Challenge series was a part of two Indy Car events in April, separated by one week and 2,000 miles. First was the Toyota Grand Prix of Long Beach, an infamous street race on the California coast, followed by the Honda IndyCar Grand Prix of Alabama at Barber Motorsports Park, just days later.

For the DeVilbiss/CRP Racing team, everything started with the Thunder on Pine event adjacent to the race track, where fans always come out in droves to see the racecars up close, witness IndyCar pit stops, freestyle motocross, and a car show. This is an event to look forward to every year and a great way to start our race weekend; unfortunately, it ended up being one of few highlights for us.

With just one practice session on Friday and qualifying Saturday, there wasn’t a lot of track time to be had for Pirelli World Challenge competitors. I spent some of my extra time on Saturday talking with the kids visiting as a part of the Racers Who Care program, which is a pretty cool opportunity for some of the locals to visit the event. Unfortunately, our race was less eventful than the drive to the track on Sunday because we broke an axle on the presentation lap. Turns out this was a bit of a blessing in disguise as we missed what was a messy race with lots of damage and penalties.

As we arrived at Barber just a couple days later, many members of the series were fuming from the post-race penalties and some cars were unable to make the event due to damage. Fortunately, we were not among those affected and were able to focus forward on what stood to be a promising weekend at a track expected to suit our Audi well. We were also excited to welcome a new partner in Jet-Hot High Performance Coatings, and were hoping to get some good finishes to turn our season around.

Testing on Thursday started strong as we had good pace on used tires and the car was improving with every change. We had one more practice session on Friday and did our first run on new tires, setting the fastest time early on and holding the lead for most of the session. Towards the end, we dropped a few positions, but we were very pleased.
The weather forecast for Saturday showed lots of rain, so we were not surprised when we showed up to a wet track for qualifying. What was surprising was how the weather changed and started to dry for our session, making for a very difficult tire choice between the required Pirelli rain tires, or dry-weather slicks. We ended up running wet tires and set times throughout the session that would have had us on the front row; however, it dried just enough in the last minute that some drivers on dry tires were able to go faster on the final lap and we fell to sixth place. There were two drivers in front of us that had penalties from Long Beach, so we ended up being gridded in fourth for the race.

That race was just a couple hours later, but the track was now completely dry and the weather looked like it would stay that way throughout. The first race this weekend was a rolling start, which helped everyone get going cleanly and we were able to hold the outside line through Turn 1 to take third place from the Effort Racing Porsche of Lewis as we turned into the carousel. I had to be a little defensive for the first half a lap, but after things settled down a bit I was able to focus on setting a fast lap to qualify well for Race 2.

It became apparent pretty early on that we did not have the pace to get around the Lamborghini or GT-R out front, but it seemed we could pull away from those behind, so things were going smoothly. We had three full course cautions, and being that our Audi struggles with straight line speed compared to the competition, we were worried about the restarts. Fortunately, we were able to hold our position each time to get our second podium finish of the year!

We were starting outside of the second row again on Sunday, but this time it would be a standing start. While our initial launch was good, we didn’t get enough traction through the top of first gear and we lost out to the Porsche of Dalziel and the McLaren of Estre. As Montecalvo and Catsburg got into each other at the carousel, we picked up a few spots right before the course went yellow. On the restart a lap latter the Ferrari of Beretta rocketed past and we followed him for the first half of the race until Johnny’s Cadillac had a major moment right behind us and caught fire in the runoff area at Turn 5.

By the time the fire was under control and everything was cleared, we only had a few minutes remaining, but we got a clean restart and were able to have a couple looks at moving forward, but nothing materialized. There wasn’t much pressure from behind and we maintained our Top 5 for two clean finishes and good points.

The series will visit Canadian Tire Motorsports Park next month, where we have won the last four Pirelli World Challenge GT races. Hopefully there will be some Balance of Performance changes before then so that our Audi can keep up on the long Andretti straight. Stay tuned!