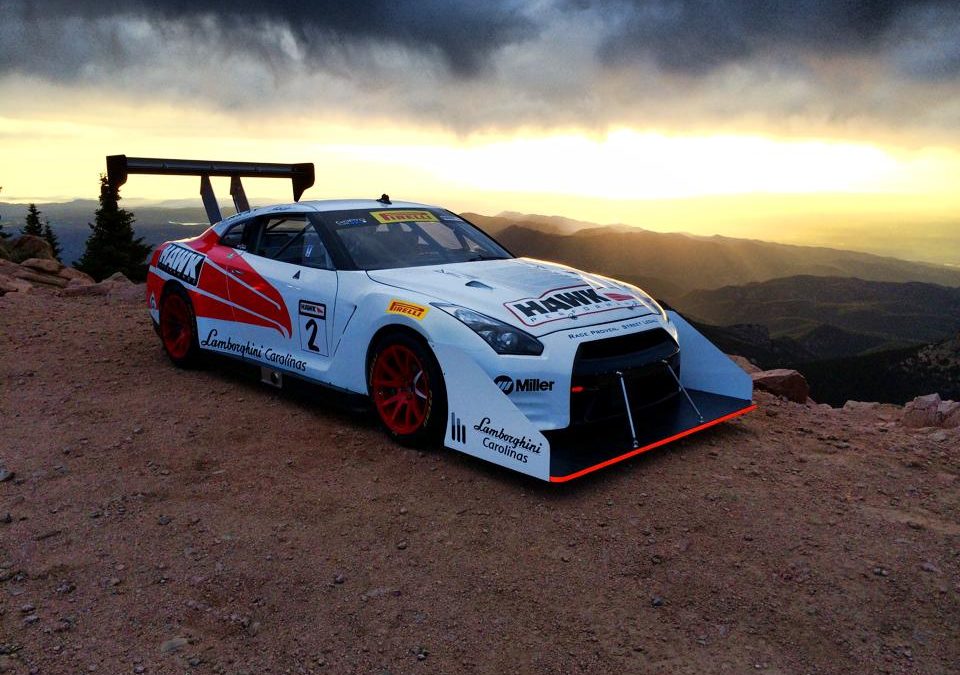 On Monday, June 23rd, I found myself flying out to Colorado Springs, Colorado, for the 92nd running of the Pikes Peak International Hill Climb.  I was fresh off a pair of wins at Road America in our Hawk Performance Audi R8 Ultra, but it was time to transition into Rookie Mode.  There were lots of unknowns for us at this new event, but some of my team members had beaten me there with our Hawk Performance Nissan GT-R and were getting everything ready to go.

Although race day only requires about ten minutes in the seat, the week of PPIHC makes this an endurance event of sorts.  Practice begins on Tuesday and runs through Friday, with one qualifying day thrown in based on your run group–the mountain is broken up into three stages, and all the participants are divided into groups (1 motorcycle group, and two car groups).  These practice days begin with a wake-up call around 2am, and an arrival at the mountain between 3-4am.  Practice starts at sunrise–roughly 5:15–and all cars make a run on their section until everyone is done and goes back down to the pits.  This goes through about 3-4 cycles depending on delays and length of the section before the park opens to the public around 9am.

Our group started with the middle section on Tuesday, and we had a few minor issues that cost us a run, but nothing major.  Wednesday we moved up to the top section with another very early morning, but the car ran excellent and we managed four runs through the section.

Thursday we were on the bottom section for our qualifying day.  This is the longest section of the three and quite fast.  I took my first run pretty conservatively, but my second and third runs were quick and put us first in class and well up the order for race day.  This is important, because the weather at the peak can change dramatically and is typically prone to rain as the afternoon progresses.

Friday gave us another opportunity to drive the middle section, which was good for us since we had had a few issues on the first practice day.  After a few clean, quick runs, we called it a day and started cleaning it up for the Fan Fest in downtown Colorado Springs that evening.  We were very excited and honored to have the Hawk Performance GT-R on display as a class leader for this big event that is really embraced by the local fans.

Saturday was our day off from the mountain, but the crew was busy at work going over every nut and bolt to make sure the car was safe and fast for race day.  I took the time to review more videos–both my own and others–to make sure I had a handle on all 156 turns that I would have to get through.  In the afternoon we took the trailer back up to the mountain to park in our race day pit stall (in the woods) and then drove the rental car up to the peak in significantly more than ten minutes.

Sunday was our earliest morning yet, as we had been told how the traffic would back up at the main entrance.  With our early arrival, we all had a chance to go back to sleep in the truck before unloading at sunrise, going to driver’s meetings, and watching the bikes start off just after 8am.

There was a red flag mid-morning for a bike wreck near the peak, but there was not much news in the paddock about what happened.  The race eventually got going again and only saw a few other brief delays, which put the cars on track around lunch time–I know this because I was starving (but totally lost track of time)!

As we rolled the car out to the street to prepare for the start of the run, I heard news that the rider that had gone down that morning had passed away.  Very sobering, and not quite what you want to hear before getting the green flag.  As I pushed that news out of my thought process, I strapped in and rolled up to the starting line.

As they threw the green flag, I got a good launch and heard the camera helicopter fall in behind me as I ran up through the gears for the fast section that begins the run.  The run consists of some very distinct sections, as well as some corners that look identical on entry, but are very different as you go through them.  It’s important to keep track of these, and sort of check them off the list in your head as you go through them.

Early in our run the car was not working as well as it had in practice and qualifying due to a tire choice that we made for race day.  Because the balance wasn’t quite there, I decided to run what I considered to be a safe, conservative pace.  I felt like we had a decent margin to work with in our class, so it wouldn’t be smart to push for more than was necessary.

I made it through to the top section, saw the helicopter yet again, and knew we were in the home stretch.  This part of the course gets quite bumpy, but the car was still running strong, temps were good, and I was confident we could make it to the top with a decent time.

Crossing the finish line and staging up behind “Monster” Tajima, Dumas, Greg Tracy, and others that have tasted victory on the peak was a bit surreal.  After a few minutes around the cars chatting with fellow drivers, I walked over to the rail house to check our time and wait for the rest of our class to finish their runs.  From there, I went to the gift shop/cafeteria and spent most of the afternoon chatting and telling lies with other drivers as they finished.  The lack of oxygen may have made the stories even better than usual!

I think that is one of the most interesting parts of this event.  The time spent at the top of the hill (even on practice days) really gives drivers a lot of time to talk and there is a strong sense of camaraderie in the paddock.

After hours of waiting, we started to see the final competitors coming up the hill and everyone started to get in their cars, or on their bikes for the descent.  Everyone is eager to get off the peak, and it was pretty cool to sit there as each machine fired up, revved, and waited to get moving again.  There is a lot of fanfare on the way down as the spectators line the roads to high-five every driver or rider as they come through, and there is an amazing feeling of accomplishment to drive down holding a checkered flag for winning your class with masked, unknown riders giving you thumbs up, and fans cheering the whole way.  Very.  Cool.

I hope to be back.